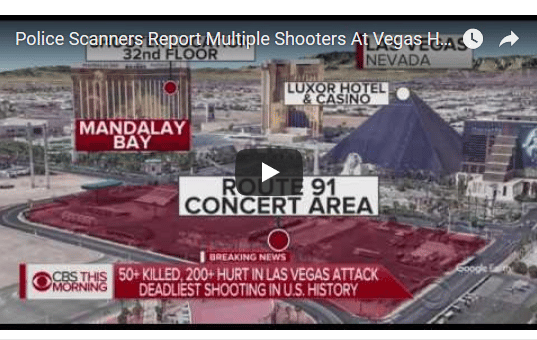 Our hearts and prayers go out to those devastated by this ruthless massacre. That’s why we must get to the truth.

Watch and Listen The Infowars Team take on the official narrative that is beginning to die simply because the public doesn’t believe Lamestream anymore. They are the old, we are the new … the true liberals! 😉

When you listen to the police scanner from the night of the attack, you’ll clearly hear multiple reports of multiple shooters. At one point one of the officers practically “confirmed” there were at least “two shooters” he says on the audio.

CNN, MSNBC, CBS or even FOX, We’re not buying the official narrative of what happened. We may not be saying that there were fake bullets and nobody got shot (even though there were reports of “fake bullets”). We think most likely people really did get hurt and its a VERY SAD thing. Our hearts and prayers go out to those devastated by this ruthless massacre. That’s why we must get to the truth. There were multiple shooters, and I believe the narrative that says Paddock was working for the US Government supplying guns to ISIS within America (info provided by Anonymous & 4chan) and that he is ACTUALLY STILL ALIVE <– Click there!

Are you awake yet?

The below video I believe has come commentary however you CAN LISTEN to full Scanner Audio Here! 1 hr audio!

TUNE INTO OUR WEEKLY BROADCAST THIS SUNDAY at 1pm Central.
Radio.EternalAffairsMedia.com