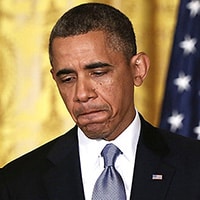 Reports circling online are suggesting that the Republican National Committee is to consider a resolution drafted for the impeachment of President Barack Obama.

The resolution, which seems to have been drafted by the North American Law Center, is to be weighed up at a January 13th meeting of the RNC, reports Brandon Hall of West Michigan Politics blog.

The truth is we are far overdo to impeach the illegal immigrant, Barack Hussein Obama A.k.a Barry Sataro. He has been illegally acting as Dictator in the United States for the past seven years signing in executive order after executive order in unprecedented amounts; acting as if he were the KING of The Tyranny … polluting the checks and balances system that says the LEGISLATIVE BRANCH MAKES LAWS NOT THE PRESIDENT.

Therefore, if Obama says he’s going to take guns it does not ONLY infringe on our constitutional rights, it goes against everything we stand for and you might as well say goodbye to all …