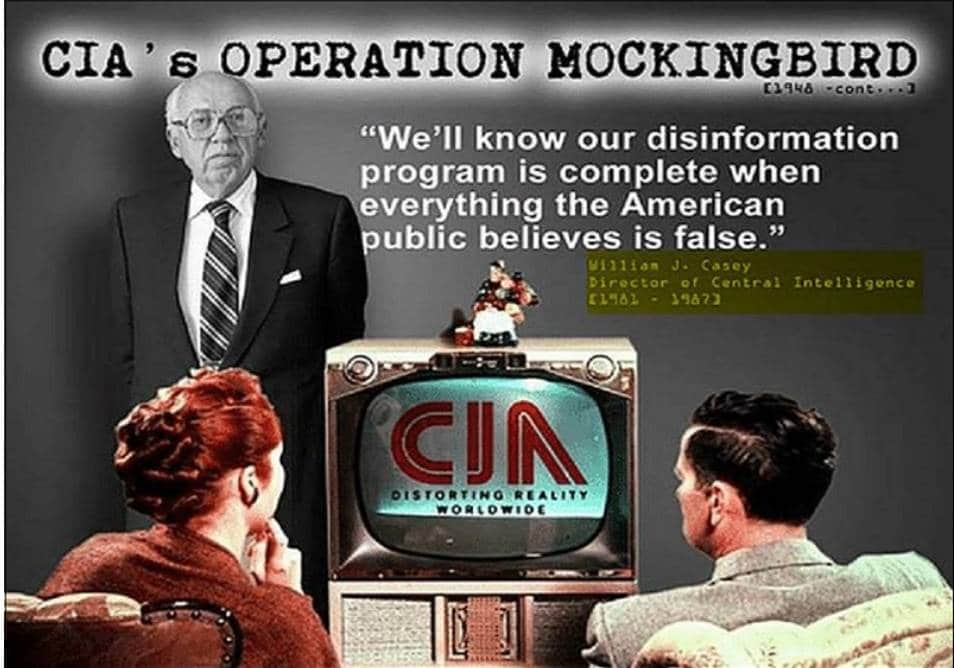 
Turn Off The TV: How The Mainstream Media Lies & Deceives

Turn Off The TV: How The Mainstream Media Lies & Deceives

If you had a relationship with a business partner or spouse, and you thought everything was going just perfect, and then you learn that your trusted buddy, spouse or business partner had been cheating, embezzling behind your back; even if the incident was 20 years ago, it would make you very reluctant to trust them again with anything.

Prior to 9/11/2001, I had an attitude that most broadcast journalism was at least attempting to inform the public of things that would benefit the public at large. However post 9/11/2001, I have become convinced beyond a shadow of a doubt that the media is a propaganda tool ran by the father of lies, Satan, himself.

I want a DIVORCE.

Research on the subject reveals that it’s been a tool for Big Money to exercise control for a very long time and the corruption runs deep. All TV News Stations are owned & operated by a few select ‘6 corporations’ spearheaded by the most elite families in the world. Agenda?

In the late 19th century, there was a growing distrust of “big money”, however with ever increasing control over what people read, big money created its own image. That being one of benevolence.

“Trust us to bring you the news, the real news, the stuff you need to know.”, the great father of all lies & false prophet proclaims to the masses.

In 1915, the J.P. Morgan company purchased 25 newspapers, in order to control their editorial content. Before Radio or TV, newspapers were the mainstream media and wielded considerable power in shaping public opinion.

With editorial control over these newspapers, they could influence public opinion and indeed how people vote. Sound similar?

Walter Cronkite used to say at the end of his legendary news hour:

The network wanted the TV “news” to be the only source the audience would accept as the NEWS, thus Walter Cronkite adopted the phrase “and that’s the way it is . . . “

For an example of the government meddling in public opinion, see CIA document 1035-960. It’s about labeling anything that questions the official story “Conspiracy Theories“.

For proof beyond any doubt that the Media & Government are willing and able to act in unison to promote a lie, we need look no further than the events of 9/11/2001.

The further you deep into the crevasses of 9/11, you will see that we’ve been lied to and duped into believing a mass deception.

In a nutshell, the official story about what allegedly happened that day:

19 radical Muslims boarded 4 airliners, hijacked said airliners and managed to employ three of them as weapons. FLT11 allegedly struck the north wall of the north tower at a speed of 465 mph. FLT175 allegedly struck the south wall of the south tower at 590 mph. The plane crashes caused such damage as to trigger the collapse of the Twin Towers. Complete and total destruction of the towers; all from an airplane. FLT77 allegedly struck the Pentagon at 530 mph. The fourth plane was allegedly taken back by passengers and crew, and crashed in a field in Pennsylvania completely burying the majority of the wreckage, erasing any trace of the truth.

In the case of each crash into a wall, the plane was said to have penetrated the wall completely leaving behind <1% of the mass of the plane. And penetration included the wings, in the case of the twin towers, both displayed a “wing-shaped gash”. Absolute ridiculousness!

Is it not at the very least, suspicious? … that three airliners could have penetrated completely into buildings leaving behind >1% of the mass of the plane? Is it not questionable, that the three flights which allegedly crashed into buildings did so at speeds far in excess of the normal operating parameters for the airliner?

“No Boeing 767 could attain a speed of 540 mph at 1000 feet above sea level ‘parasite drag doubles with velocity’ and ‘parasite power’ cubes with velocity. The fan portion of the engine is not designed to accept the volume of dense air at that altitude and speed, “ said John Lear.

Plane crashes are chaotic and messy. Given the fact that the wing-shaped gash in the tower wall, in addition to the news reports on the subject, indicates that the wings were tilted at aprox. a 27-degree angle; this is a very clear hint that the plane would have been subject to asymmetrical forces upon contact with the wall.

Note that in the case of automotive crash tests, an impacted vehicle will have the rear of it rise up, because of the energy at work. It will manifest in any manner possible.

Why was it assumed that the airliners would penetrate straight into the building?

The plane’s motion was not perfectly aligned with the line from tail to nose (x-axis). Upon touching the nose to the wall, there would have been forces subjecting the plane to stress well-enough to completely destroy & obliterate it. This would have happened before it had any opportunity to make that famous wing-shaped gash.

Additionally, the plane was allegedly off perpendicular to the wall in the following manner. Roll 27 degrees; Yaw 14 degrees; Pitch 3 degrees. In this case, the port side wing would contact the wall significantly before the starboard side wing and would add to already asymmetrical force upon the plane.

The tower wall was constructed of 14″ steel box columns spaced 40″ on centers.

The box columns were hollow and had a wall thickness of 1/4″.

The outer wall was load bearing.

In order to have penetrated the wall, (as alleged by the media) the airliner would have had to: (exclusive of the wing-shaped gash)

There would be resistance, continuously as the plane entered the building, (that is if it entered).

There’s a multitude of possibilities for what could happen in a crash of an airliner into a skyscraper wall.

To discuss the alternatives to the official story about the alleged FLT175:

B: The plane strikes the wall, and pivots about the contact point the tail going up and to the west, smashing the fuselage against the wall without penetrating.

C: The plane strikes the wall and given Conservation of Momentum + Equal & Opposite Reaction, the fuselage fractures, expending energy, a mass of wreckage strikes the wall like a shotgun blast, with minimal penetration or damage to the tower.

Of course this list isn’t all inclusive, there would be a multitude of variables, in logic, it is much more accurately defined as to what most certainly did not happen, rather than what did happen.

Having made that case that the media lied and did so in a very serious way, what so called “news” can be trusted at all?

As a result of the alleged airliner hijacking, TSA was created, and TSA has proven itself to be a bad joke designed to trample on the rights & liberties of American citizens. Remember the liquid-bomb scare?

TSA agents would routinely remove bottles of water from travelers carry on bags, and throwing said bottles of suspected explosive into a bin next to the checkpoint. The whole thing is a total farce. The government lies, and the media is complicit in the fraud.

One significant feature of the security theater at the airport; being that it is an exercise in “shut-up and do as you are told” … the American public is being trained to follow unconstitutional orders from marginally trained minions.

Now in the present, we have been presented with a “virus” with a 99+% survival rate. The government response to this has been to issue totally unconstitutional orders to shut-down business and mandate unproven prophylactic measures. Everyone is told to follow under threat of being guilt-tripped for causing the death of some unfortunate citizen, or even worse … being locked up.