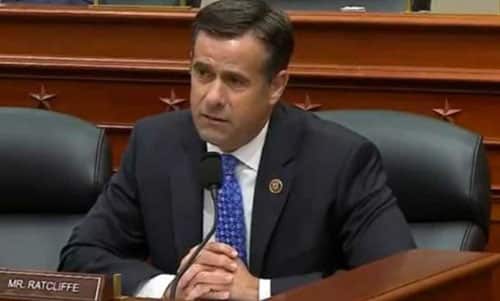 
Joe Biden May Not Be Installed In The White House, Suggests DNI John Ratcliffe

Appearing on a recent segment of “Sunday Morning Futures” with Maria Bartiromo, Director of National Intelligence (DNI) John Ratcliffe made the suggestion that Joe Biden could end up losing the election.

While discussing issues related to communist Chinese influence over the election and Special Counsel John Durham’s investigation into the origins of the Russia probe, Ratcliffe responded to a question from Bartiromo about how the “Biden administration” would deal with issues of national security by stating:

“These election issues, we’ll see who is in what seats and whether there is a Biden administration.”

In other words, Ratcliffe is not so sure that there will even be a Biden administration, despite the mainstream media coronating him as the election “winner.”

This is a bold statement for Ratcliffe to make, and one that he did not appear to make lightly. Ratcliffe would seem to know that some pretty big things are happening behind the scenes that could derail Democrat efforts to steal the White House from President Donald Trump.