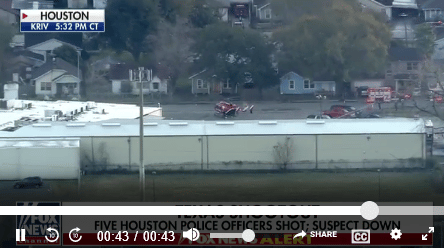 Five police officers were struck by gunfire in Houston on Monday, police said. The condition of the officers was not immediately available.

The officers were shot at a home in the southeast portion of the city, Fox 26 reported. The suspect in the shooting, according to Houston mayor Sylvester Turner, is “down.” The location of the shooting, according to police, is still considered an “active crime scene” and the public is being urged to avoid the area. Police confirmed that “one suspect is DOA at the scene.”

The officers were in the process of serving a warrant at the time of the shooting, according to Fox 26.