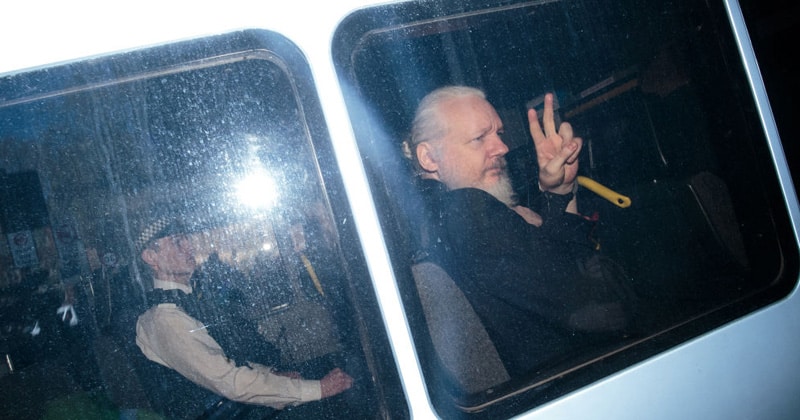 WikiLeaks founder Julian Assange has been sentenced to 50 weeks—for almost a year—in prison by a London court for breaching his bail conditions in 2012 and taking refuge in the Ecuadorian embassy for nearly 7 years.

Although Sweden dropped its preliminary investigation into the rape accusation against Julian Assange in 2017, Assange chose not to leave the Ecuadorian Embassy due to fears of extradition to the United States.

Read This Report on The Hacker News Here! … We want to know … What do you think this does to THE PLAN? Can we still trust it?

Also check this out … IN TRUTH MEDIA …

When the government has the power to tell us what we we allowed to see, hear, and know, we no longer live in a free society

They, and so many more, were imprisoned because they told the truth about their governments.

Repressive governments do not want their citizens to know that they are up to so they insist on controlling the media. We are taught, at the same time, that we have a free press whose job it is to uncover the corruption in our system so that we can demand our political leaders make some changes or face unemployment. That, we are told, is what makes us different from the totalitarian.

The arrest of Assange is a canary in a coal mine to warn us that something is very wrong with our system.

What’s wrong? The US mainstream media always seems to do the bidding of the US government. That is why they rushed to confirm Washington’s claim that the Assange indictment was not in any way about journalism. It was only about hacking government computers!

As the New York Times said in an editorial, sounding like a mouthpiece of the US government, Julian Assange committed “an indisputable crime.” But was it? As actual journalist Glenn Greenwald wrote last week, what Julian Assange did in 2010, for which he is facing extradition to the US, is no different from what New York Times and other journalists do every day! He attempted to help Chelsea Manning shield his identity as he blew the whistle on US government crimes to a publisher. The information in question included a video showing US military personnel participating in and cheering the murder of Iraqi civilians. Why is it criminal for us to know this?

The difference is that what Assange and Manning did embarrassed the US government, which was lying to us that it was “liberating” Iraq and Afghanistan when it was actually doing the opposite. Mainstream journalists publish “leaks” that help bolster the neocon or other vested narratives of the different factions of the US government. That’s why the US media wants to see Assange in prison, or worse: he upset their apple cart.