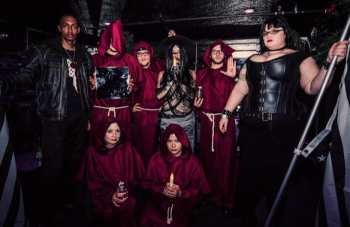 Missouri Courts Side With Satanists On Abortion Law

One way to know that you are on the wrong side of God is when the devil joins your cause.

The Satanic Temple recently filed and won a legal challenge against Missouri’s abortion laws based on the devil worshippers’ and a woman who had an abortion’s “religious freedom.” The case will now move to the Missouri Supreme Court.

The Satanic lawsuits argue that Missouri’s conservative approach to abortion that requires women to receive and review informed consent materials, have an ultrasound and undergo a 72-hour waiting period violate the rights of Satan worshippers and women everywhere.

The suits have been log-jammed in the courts since 2015 after a Jane Doe case involving a woman who drove to a St. Louis Planned Parenthood to get an abortion was apparently outraged she had to wait 72 hours to take her child’s life. The woman went as far as to write a disclaimer saying she reviewed the informed consent materials in an attempt to get past the wait time. The abortion doctor, however, was bound by law to wait 72 hours. Jane Doe found supporters in a New Jersey lawyer, Satanic Temple founder Lucian Greaves.

The most disturbing part of this case may not be the immorality and desire to tear down Western values. It’s disheartening that the very Constitution that ensures religious liberty is being subverted to create a secular society where life can be freely snuffed out. The Satanic Temple lawsuit focuses on First Amendment rights, and claims Jane Does can abort babies based on free expression. The lawsuit also claims that the informed consent procedures runs contrary to the state’s Religious Freedom Restoration Act. Through this, Satanists have effectively weaponized religious freedom laws to suit their own twisted agenda.

Although “free expression” has roundly been considered things such as speech, peaceful protect and artistic creativity, the Satanists have gained traction with their counter-intuitive free expression argument. The Western District of the Missouri Court of Appeals recently ruled in favor of Jane Doe and the Satanic Temple. In a controversial opinion, the state appeals panel says the case “raises real and substantial constitutional claims.”

The New Jersey lawyer behind the anonymous Jane Doe continued to advocate for the righteousness of unfettered abortions. After the Satanic win, he reportedly said Missouri’s law “effectively deputizes doctors to preach the gospel according to the state of Missouri to pregnant women and essentially requires doctors to tell their patients, ‘If you get an abortion you’re committing murder.’”

Missouri Attorney General Josh Hawley does not appear phased by the legal setback.