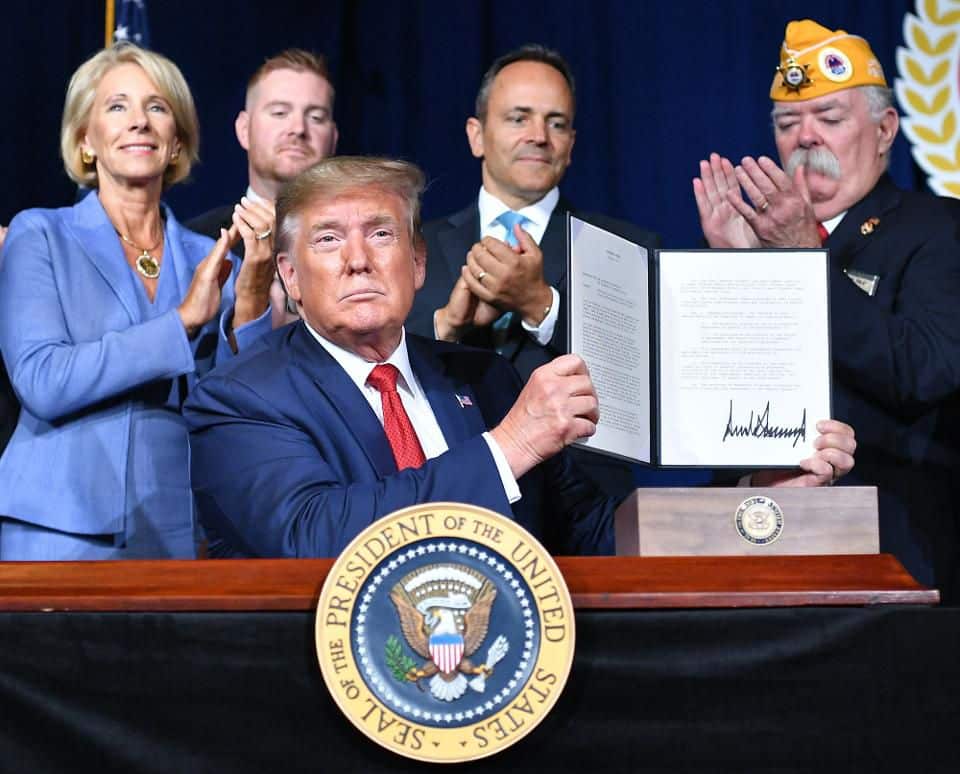 Trump Is Forgiving Student Loan Debt For Thousands of Veterans

"You have written our history, shaped our identity, forged our destiny, marched us to glory, and always planted the righteous flag of American victory." pic.twitter.com/sWIWwEBfmg


President Trump addressed the American Veterans 75th National Convention today, an event that coincides with his latest action to protect our heroes in uniform. Just hours ago, the President signed a memorandum that ensures permanently disabled veterans obtain the federal student loan debt discharges to which they are entitled.

Only half of the roughly 50,000 disabled veterans who are qualified to have these loans discharged have received this hard-earned benefit. Fortunately, that will soon change.

America’s veterans should never have to go the extra mile to receive the benefits and services they are rightfully owed for their sacrifice. These brave men and women proudly served our nation. Now, it’s time for our government to serve them fairly, as well.

President Trump has worked since his Inauguration Day to reform the federal bureaucracy, making it more responsive to veterans’ needs and less fixated on its own interests. In 2017, he signed the Forever GI Bill into law, allowing individuals to access their veteran educational benefits at any point in during their lifetimes.

Also in 2017, he signed the VA Accountability and Whistleblower Protection Act into law, making it easier to hold failing VA employees accountable for their actions. Since then, the VA has fired more than 7,600 employees who have failed our veterans. Even more important, it has instituted reforms to increase efficiency and decrease abuse.

As a result, VA healthcare today is significantly better than when President Trump was elected, with trust in VA outpatient healthcare now close to 90 percent.

See what President Trump is doing to defend and protect America’s veterans.