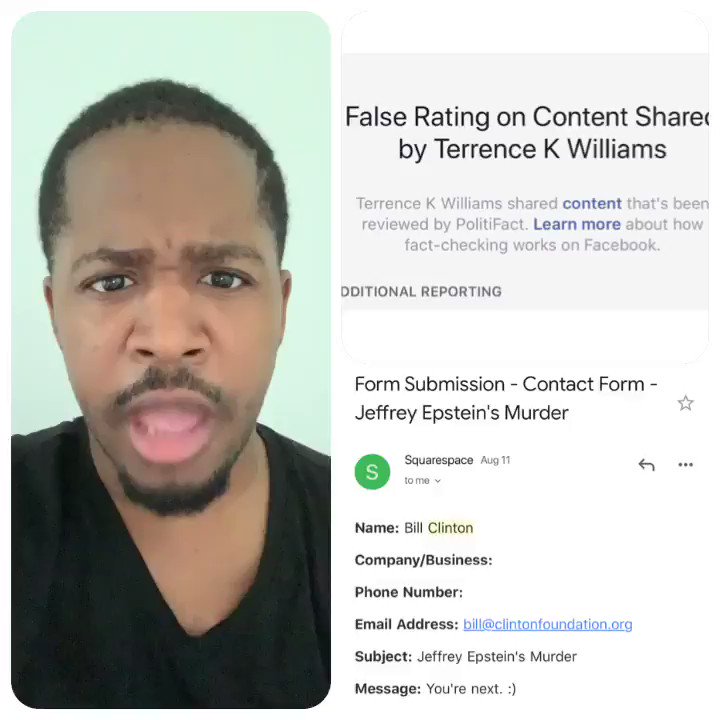 Leftists Threaten Comedian Who Questioned Whether Clintons Behind Epstein Death

A comedian says he’s been receiving death threats after a tweet in which he blamed the Clintons for Jeffrey Epstein’s death was promoted by President Trump.

on Saturday posted a hilarious take on Epstein’s reported suicide, questioning why people who have information on the Clintons always seem to kill themselves.

Following the viral tweet, which received over 5.3 million views, Williams says leftists began sending him messages telling him to watch his back.

“Ever since President Trump retweeted me, people have been sending me death threats, threatening me every single day, telling me I better watch my back,” Williams said in a video post Tuesday, sparking the hashtag #ProtectTerrenceKWilliams.


THEY ARE COMING AFTER ME!

After @realDonaldTrump Retweeted me I received threats &
now Facebook is after me.

I’m worried about my safety.


“You’re next,” one user told Williams, with a smiley face.

“I’m going to fuck your house slave ass when I see you,” another user commented.

“Facebook has sent out their fact checkers to fact check my page,” Williams remarked. “They are telling my followers that my page is fake news, that my content is fake news. I am a comedian. How can you fact check a joke?”

Williams asks President Trump “to do something about Free Speech” before he’s censored ahead of the 2020 elections.

He also made sure to reassure his audience he’s not suicidal.

“They are coming after conservatives and Trump supporters because 2020 is around the corner, and they are trying to shut me down,” Williams said.

Trump referred to the Williams retweet Tuesday when asked by reporters if he believed the Clintons could be responsible for Epstein’s death.

“I have no idea,” President Trump stated. “I know he was on his plane 27 times and he said he was on the plane 4 times. But when they checked the plane logs, Bill Clinton who was a very good friend of Epstein, he was on the plane about 27 or 28 times. So why did he say four times? And then the question you have to ask is did Bill Clinton go to the island? Because Epstein had an island that was not a good place, as I understand it. And I was never there, but you have to ask, did Bill Clinton go to the island. That’s the question. If you find that out, you’re going to know a lot.”