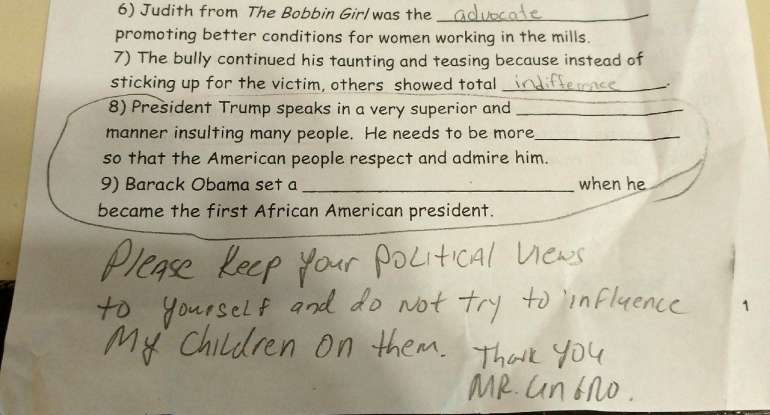 To say that some people dislike Donald Trump may well be the understatement of the year. It’s hard to imagine any duly elected president seeing so many protests, yet here we are.

It’s so bad that now an 11-year-old in Annadale, New York, was docked 15 points on a homework assignment because she failed to answer a question demanding students bash Trump:

Vincent Ungro, a dad from Annadale, New York, has an 11-year-old daughter who attends I.S. (Intermediate School) 75. She asked him for help with her vocabulary homework last Friday night because she was trying to fill in the blanks from a word bank to complete her assignment — and was really puzzled.
“President Trump speaks in a very superior and manner insulting many people. He needs to be more _ so that the American people respect and admire him,” read one homework sentence.

The next question was: “Barack Obama set a _ when he became the first African-American president.”

And what were the choices for the two questions, you ask? These three words: “haughty,” “humble,” and “precedent.” You can guess which ones were meant to be the “correct” answers in this teacher’s mind.

Ungro, 46, told his daughter not to fill in those blanks — and wrote a note to the teacher, Adria Zawatsky, on the homework sheet, as The Post noted. “Please keep your political views to yourself and do not try to influence my children on them. Thank you,” he wrote.

The teacher docked the points — which Ungro called “vindictive.”

The teacher emailed Ungro and defended her question, stating that she was addressing his personality rather than his ability to serve in the office of president. She went on to add that the media makes similar references to Trump, and that she believes she has the same right.

Unfortunately, people can either stop reading or change the channel when the media pontificates in an unwelcome way. An 11-year-old can’t.

Students are stuck in that classroom and they’re required to do what the teacher says in these cases — and it can affect their future if they do not comply. This is a prime example of forced political indoctrination in public education.