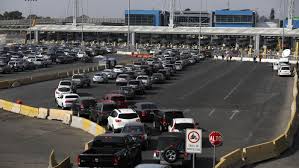 In The Daily Signal, Fred Lucas explains the precedent behind the Trump Administration’s recent efforts to protect our southern border.

“Presidents Richard Nixon and Ronald Reagan both closed the border over drug-related issues that halted entry from Mexico into the United States,” Lucas reports. “With Nixon in 1969 and Reagan in 1985—as is the case today—the United States was trying to pressure the Mexican government’s law enforcement into stepping up its efforts.”