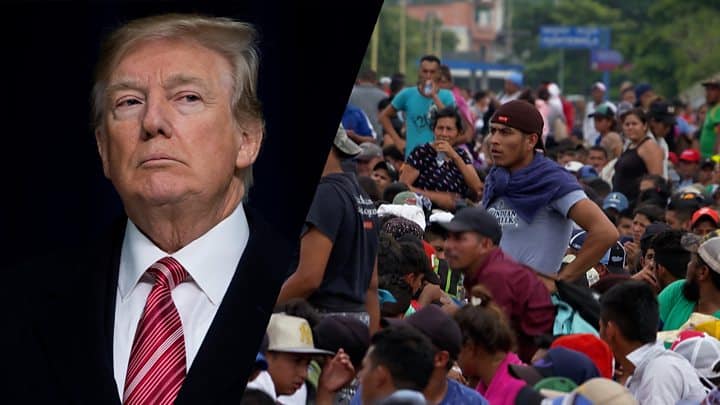 Bombshell Prophecy: The Migrant Caravan Will Turn Around …

As President Donald J Trump is sending hundreds of military vehicles and thousands of troops to the U.S. Southern Border, we have been carefully observing all the uproar in regards to this PLANNED INVASION!

Another thing we have been doing for a few month now is syndicating pieces of Charisma News / Media / Magazine’s articles mostly related to Biblical Prophecy … well Karen Hardin with Charisma has a BOMBSHELL PROPHECY ABOUT THE CARAVAN she just came out with yesterday!

All America and most of the world stand and watch as the caravan of illegal immigrants marches toward our southern border from one direction only to be met by a host of what is now 7,300 of our National Guard and troops who have been deployed and march toward them from the opposite direction.

They will meet at the border, where our troops have been given instruction to “hold the line.”

As believers, we are given the same instruction to “hold the line.” It is what we do in prayer and intercession. It is the call of the saints in this hour.

It is what David did as he heard Goliath challenge the Israelites. He ran to the “border” to hold the line.

Like many of you, I am getting up earlier and staying up later to pray and intercede for both the upcoming elections and this force that is marching toward our borders. There has been a call for chaos in our land, but we are to call for protection.

Many pray for peace, but we are in days like that of Jehu in ancient times: “‘When Joram saw Jehu he said, “Is it peace, Jehu?’

“And he said, ‘What peace, so long as the harlotries of your mother Jezebel and her sorceries are so many?'” (2 Kings 9:22).

As we intercede, we call down the high places where witchcraft and pride have been given access. Where rebellion and lawlessness are marching against the spirit of truth. That is the place where we battle as we pray.

How will this end? The Lord spoke this word to me last night,

“By the way that he came, by the same shall he return, and shall not come into this city, says the Lord. For I will defend this city to save it for My own sake and for the sake of My servant David” (Isa. 37:34-35).

But the battle will not end there. We must be aware of the hour. The Lord spoke a word to the priests in Malachi’s day which bears repeating.