The Truth About Snapchat In The Bible: Prophecy From 2700 Years Ago Speaks Of The Network

This was originally published on VirtuousDreams.com:

Did you know that Snapchat is Biblical? Absolutely. I have been building a case against Snapchat for quite some time. There are several things I want to share with you about Snapchat. If this were an app were private messages were sent back and forth between friends there wouldn’t be much controversial. This is not the case. Snapchat has many evil things baked in. The Bible has a lot to say about this app. Let me show you …

Against whom do ye sport yourselves? against whom make ye a wide mouth, and draw out the tongue? are ye not children of transgression, a seed of falsehood – Isaiah 57:4 KJV

Whom do you mock, making faces and sticking out your tongues? You children of sinners and liars! – Isaiah 57:4 NLT

Who are you mocking? At whom do you sneer and stick out your tongue? Are you not a brood of rebels, the offspring of liars? – Isaiah 57:4 NIV

I present to you Exhibit A. The first set of Snapchat Filters …

Do you see Isaiah 57:4 when you see these Snapchat Filters? I do. Not only do these filters draw out the tongue they make the wide mouth. You can see the unflattering terms Isaiah attributes to Snapchat users. He describes them as the children of sinners and liars. He describes them as the rebels and the children of transgression. He’s not wrong. Its just more of Isaiah’s prophecies coming true. Isaiah was making prophecies about Jesus 700 years before Christ arrived on the scene. Little did we know he would prophecy about Snapchat as well. It’s really not too hard for me to fathom this. Snapchat has 100,000,000 users. It is quite a big deal in the world today. It is definitely offensive enough to prophecy about. 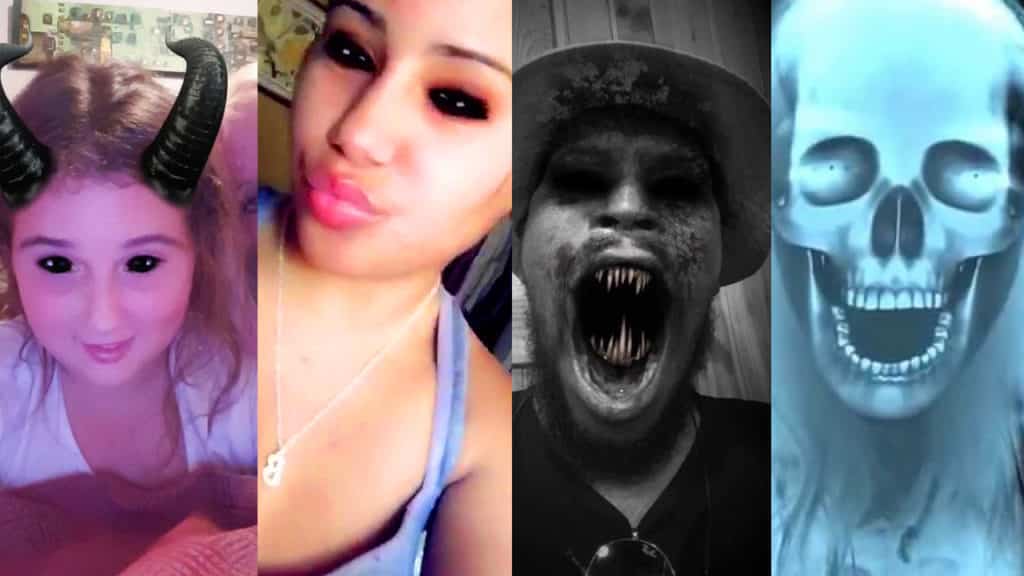 Some of these filters aren’t active right now. Snapchat swaps them in and out all the time. The filter that turns your eyes black is active for me right now. If you think for 5 seconds that an app that endorses turning your eyes black is of God you have a strong delusion. This app makes me cringe daily. I have it on my phone for just simple messaging. All I can do is show you that making the mouth wide and sticking out the tongue is in the Bible. You can see the filters for demon horns and black eyes and whatever else wicked. I have pointed out it is not hard to conceptualize Isaiah prophesied about Snapchat 2700 years ago. Yet more proof how accurate the Bible is. Do I think everyone who uses Snapchat understands these things? Not even close. Few to none. That is why I am writing to tell you about it.

Ok check this out. Lately the media is talking about some kind of “fake news” problem. The fake news the media is talking about is so insignificant it isn’t even worth talking about to be honest. I consider it fake news about fake news. I will now show you a story a thousand times more important. The true issue is called “wicked news”. Snapchat is the global leader. Ladies and gentlemen when I show you what Snapchat is doing to young people it is infuriating. Young people are being destroyed by this wickedness. I did something about it. I wrote about it. The question is will you spread the message? Ok so these are some screenshots I collected over ONE MONTH of Snapchat Discover “news stories”. These are stories promoted to you whenever you login to Snapchat … 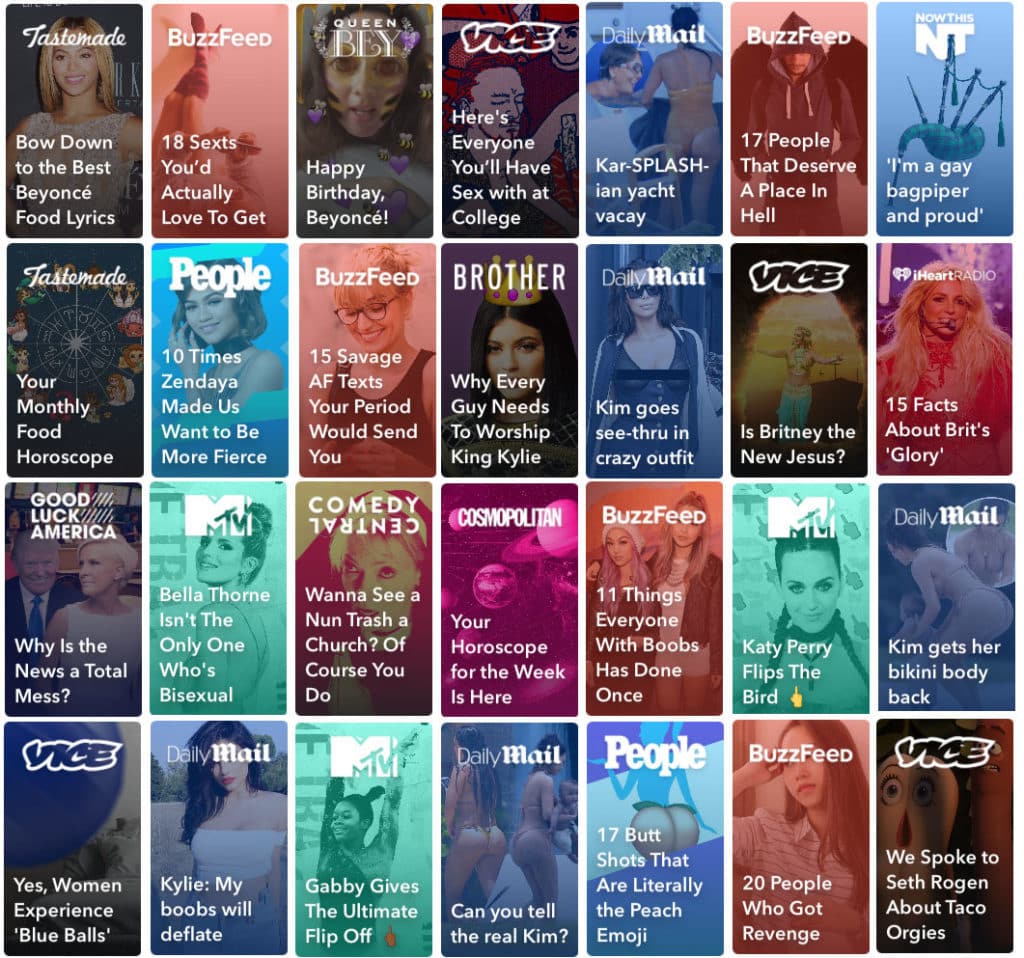 Do you see with your own two eyes what Snapchat is promoting (especially young people)? Jesus knew this would happen.

But whoso shall offend one of these little ones which believe in me, it were better for him that a millstone were hanged about his neck, and [that] he were drowned in the depth of the sea.

Woe unto the world because of offences! for it must needs be that offences come; but woe to that man by whom the offence cometh! – Matthew 18:6-7 KJV

At first I thought I was the only person on the planet to be outraged by Snapchat Discover. I was actually considering asking a lawyer to find out if it is illegal to show this garbage to minors. I found out there is at least 1 other decent human in the United States who agrees. There is a lawsuit against Snapchat for literally displaying NC-17 material to your children. This lawsuit was filed in July. The Snapchat app only requires its users to be 12 (yes TWELVE) years old. There was mild media coverage about this lawsuit. It was picked up by the LA Times, the San Jose Mercury News, USA Today, The Verge, Fortune, and a few others. Do you know who did not pick up the story? ABC, NBC, nor CBS. Don’t you worry. The major news outlets are covering the “fake news conspiracy”. They could care less if your kids are shown porn, astrology, devil worship and the most vile content humans can possibly create in Snapchat. Literally it is impossible to promote content more destructive than Snapchat Discover does. If Jerry Sandusky was posting naked snaps from prison it is my opinion that Snapchat would sign him to a publishing deal and promote him to your children in Snapchat Discover. Jesus said “for it must needs be that offences come”. I am showing you the offences. Jesus was right yet again.

Look I understand young people see vile things all day every day – believe me. This isn’t the point. The point is what Jesus said. The point is offenses will come but woe unto those by whom the offense comes. I am pointing out some of the most grievous offenses and they are coming from Snapchat. This is my point.

Snapchat was dirty and immoral from the jump. It was built around the guise of private messages. In reality it condoned (probably advocated if I research it) sexting. Now privacy itself is an honorable thing. Snapchat couldn’t even get that right – the privacy is gone. I don’t believe this company. I believe absolutely nothing they say. John 8:44 sums them up quite nicely.

One more thing in closing. Who is the man behind the plan? Who answers for this filth? Woe to that man by whom the offence cometh. That man is Evan Spiegel. I hope Evan reads this post, understands the words I am saying, and takes action to correct his abominations against mankind.