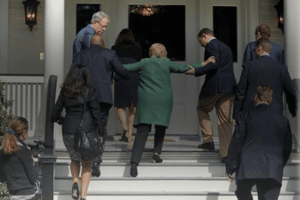 Clinton’s Secret Service Speaks OUT: She Was DRUNK at Rally

News blog True Pundit interviewed one of Clinton’s Secret Service members, who anonymously admitted: Hillary had “been hitting [alcohol] early” on the morning of June 1.

When she appeared at Rutgers University midday for a campaign rally with New Jersey Senator Cory Booker, law enforcement sources told True Pundit that Clinton was “visibly liquored, at times loud and ‘animated.’”

The Secret Service source added: “It’s happened before but not that early in the day.” The campaign rally was scheduled for 1:30pm.