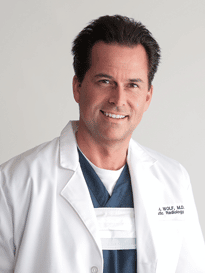 
From SenateConservatives.com on Dr. Milton Wolf:

Can you imagine having President Obama’s conservative cousin in the U.S. Senate speaking out against his dangerous policies? 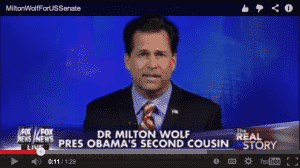 Dr. Wolf is passionate about our principles and understands that the Republican establishment is part of the problem.

Here are a few things Dr. Wolf says in the video:

“They say you cannot choose your own family, but you can choose to rise up and stop your family from destroying America.”

“I’m deeply concerned the direction our country is going, and frankly, I’m disturbed — I’m disturbed that neither party will do anything about it.”

“It was the establishment Republicans — it was the GOP of yesterday — that gave us the big government. It was our party that broke faith with the American idea.”

“When Washington wants to increase the debt, they know they can count on Pat Roberts. Senator Pat Roberts buckled under the pressure and sided with Washington instead of Kansas.”

Dr. Milton Wolf (R-KS)”Well if they’re not willing to fight for the Constitution and fight for the American idea in a small tent, they’ll never fight for it in a large tent.”

“The Patient Protection and Affordability Care Act — there’s not a single word in the title of that law that’s true. It’s by no mistake that the vast majority of doctors in this country are opposed to this because we know that it will be harmful to our patients.”

“Because we know that we’ll never change Washington until we change who we’re sending to Washington.”

“Our country is hanging by a thread and if there’s one thing we know, it’s the career politicians who got us into this mess will not be the ones who fix it.”

Milton Wolf is exactly the kind of leader our country needs in Washington.

Thank you for supporting the principles of freedom and for being willing to help outstanding candidates like Dr. Milton Wolf.