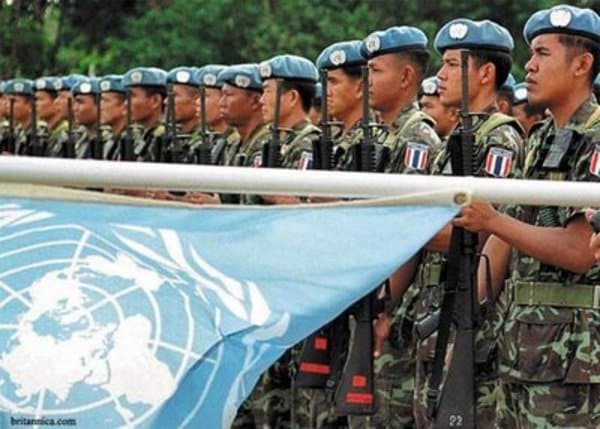 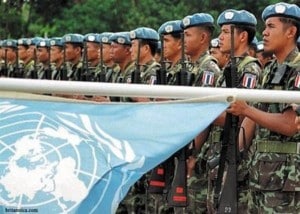 (B.K. Hyland)  There have been multiple civilian sightings of strange planes landing at American Air Force bases, all carrying UN troops and/or having UN markings (or none).

My husband, a Vietnam vet, has been back and forth to Overton-Brooks VA Medical Hospital three times a week this month. Barksdale Air Force Base, one of the most secure Strategic Air Command (SAC) bases in the nation, has had unusual C-130s or C-136s fly into Barksdale AFB and land at all hours.

The interstate runs in front of the side and front of the base and is clearly visible with no restraints. (Barksdale is where President George W. Bush landed on 9/11, it is such a safe, secure, and well-guarded installation.)

These flights have been reported by other citizens and several of the military men who work inside the base have reported that the UN troops are given US military clothing and name tags. When our servicemen question this, the soldiers are told they did NOT see what they just saw. Base operations refused to confirm or deny or discuss these sightings.

Lately, rumors and reports regarding the presence of foreign troops in the US working with our armed forces have been hitting public awareness. Originally government sources denied these reports, but now official reports are confirming what eye witnesses had been reporting. (www.SaveAmericaFoundation.com) Russia herself confirms that the Obama administration has requested 15,000 Russian troops to train with FEMA in the event of a SHTF scenario, particularly in the Washington D.C., Maryland, and Virginia area.

The question is why? It appears that foreign troops are working with US troops, practicing on urban warfare, civil unrest, and civil disturbance scenarios. In Colorado, rumors of Russian troops practicing to deal with terrorist raids and martial law scenarios have been proven correct by our own US armed forces. Peterson AFB in Colorado is another base being used.

Located in Germany is the Marshall Center, named after General George C. Marshall, who was quite the UN/NWO devotee. At this present time, the Department of Defense is conducting classes in counterterrorism. Of course, the definition of “terrorism” belongs to new world order advocates. According to the definition used by the NWO, a terrorist is anyone who opposes a takeover of their nation. That would make all NWO resistors and/or anyone who disagrees with the new world order plans potential terrorists.

Are You A Terrorist By Their Definition?

Then by UN/NWO definition, you are a terrorist!

NATO and the UN have the same goal, mission, and function: to subvert the sovereignty of the United States and the rest of the world, turning us all into a fascist worldwide state. Our government officials have proven time and again here lately that they are not to be trusted. Congress is nothing more than a rubber stamp for what the administration wants, not the representative body of the citizenry as it should be.

What catastrophic event is this administration preparing to implement now in order to seize the control they so desperately want?