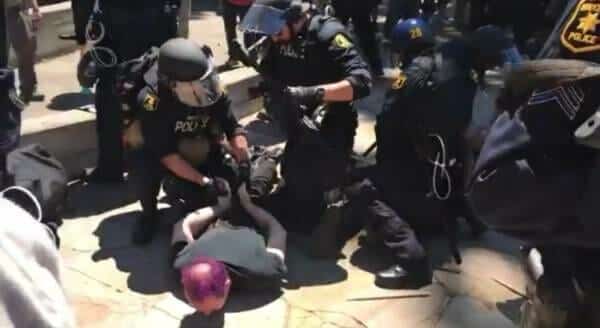 Several arrested during anti-Marxist and opposing rallies at Berkeley

Anti-Marxist demonstrators were met with violence by masked Antifa thugs and other far left protesters–police in riot gear wrestled the violent leftists to the ground and made arrests.
The goal of Antifa in Berkeley, like in Rhode Island Sunday and in Portland on Saturday, was to shut down the assembly and beat heads.

Seventeen people were arrested in connection with Sunday protests, Berkeley police said, posting the offenders’ mugshots on its Twitter page. Most were detained for possessing banned weapons, battery, vandalism and working with others to commit a crime.

Live video from the scene showed protesters beating drums and chanting slogans as police officers tried to separate rival crowds. The right-wing rally participants were seen carrying US flags and banners supporting the US President Donald Trump and shouting slogans against “communism,” while the left-wing counter-protesters could be heard chanting “No Trump, no KKK [Ku Klux Klan], no fascist USA” and “Fascists out of Berkeley!”