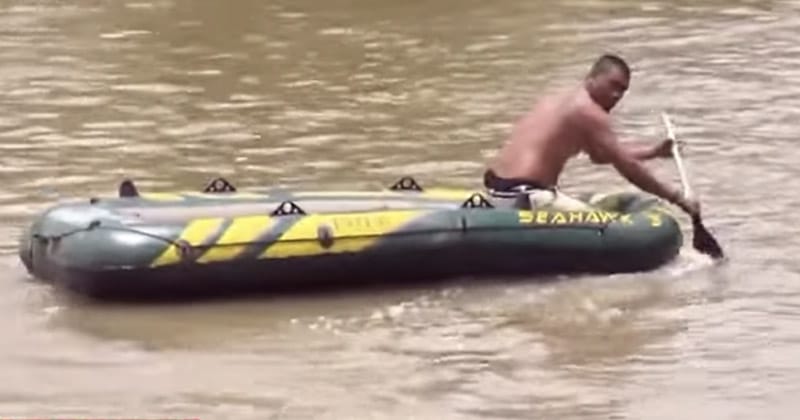 An ABC News reporter toured the southern border with a Border Patrol agent to cover the agency’s duties, only to stumble upon a smuggler ferrying illegals into the U.S.

ABC News correspondent Tom Llamas rode with Agent Robert Rodriguez near McAllen, Texas on Monday to cover the plight of “desperate” illegal immigrants, when Rodriguez spotted a smuggler dumping illegals onto the north side of the Rio Grande river.

“Smuggler!” Rodriguez yelled as he bolted after him, but the smuggler quickly hopped into an inflatable boat and paddled back frantically to Mexico.

“I can’t go into the river to apprehend him,” he said. “I assure you he was a smuggler. No shirt on and ready to jump back into the river.”

Llamas asked several illegal immigrants why they were willing to put their faith in smugglers to see them cross into the U.S.

Legitimate asylum claims only apply to people who are specifically persecuted on the basis of race, religion, or political affiliation, not the economic failures of socialist governments.

President Trump claimed many illegal immigrants coming to the U.S. are using the word “asylum” as their “password” to get into the country.

“We shouldn’t be hiring judges by the thousands, as our ridiculous immigration laws demand, we should be changing our laws, building the Wall, hire Border Agents and Ice and not let people come into our country based on the legal phrase they are told to say as their password,” he tweeted last Thursday.