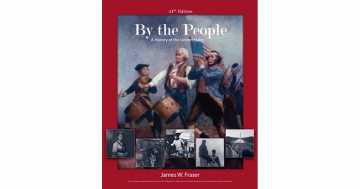 (ToddStarnes.com) Pearson Education is defending a new high school textbook that depicts President Trump as mentally ill and his supporters as a bunch of poor, white hillbillies.

The anti-Trump propaganda is included in the upcoming edition of “By The People: A History of the United States.”

“Clinton’s supporters feared that the election had been determined by people who were afraid of a rapidly developing ethnic diversity of the country … They also worried about the mental instability of the president-elect and the anger that he and his supporters brought the nation,” the book states.

“Trump’s supporters saw the vote as a victory for people who, like themselves, had been forgotten in a fast-changing America – a mostly older, often rural or suburban, an overwhelmingly white group,” the book reads.