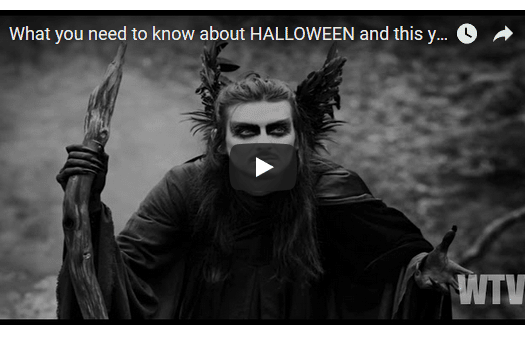 As kids of all ages run excitedly door to door, disguised by a multitude of colorful characters, clutching bags of sweet treats, the thrill of Halloween for them is purely innocent fun.  But the reality is that in the spirit realm, there are some very real evil forces at work.

“All Saints Eve” as Halloween was originally named, was dedicated to praying for and remembering and honoring the dead, including saints (hallows), martyrs, and all the faithful departed.  All Saints (Hallows’) Day was November 1, during the time of the autumn harvest which signifies the ongoing cycle of death and rebirth.

It was believed that souls of the dead would journey back to visit the living which could be rather comforting to those in mourning. But then eventually down thru the ages and after great differences of various theological beliefs, these “souls” became known to be in actuality evil spirits. As such, they were threatening and the need for spiritual protection regarding the evil spirits on Halloween, homes and property were “blessed” to protect people and livestock from the effect of witches, who were believed to accompany the malignant spirits as they traveled the earth.

Today, the meaning behind the various traditions of Halloween can become very blurred and appear benign amid the retail and commercial representation of the day.

Whatever the belief of the reader, Halloween is the time when the veil that divides the natural world from the spirit world becomes thin, and the covering between the seen and the unseen becomes more transparent.

In recent years, there has been an explosion of interest in the occult in the United States.  Some of the most popular books, television shows and movies have been about zombies, the living dead, vampires, werewolves, witches, ghosts, paranormal activity, and dark supernatural phenomena. The occult is on the rise in all segments of our society. Halloween is an Occultic/Satanic worship day and is increasingly being used to attract and introduce people to the occult. It is a time when bizarre and often illegal rituals are being performed.  Modern day witches and Satanists still worship demon gods & goddesses, practice bizarre & immoral sexual rituals, and certain groups offer animal and human sacrifices.

Spiritual warfare is a reality.  We have serious enemies that are extremely resourceful and malevolent. The Bible warns of a personal devil and myriads of demons who should be regarded as cunning enemies.  Demons have a vested interest in Halloween especially because it supports the occult, and it also offers novel and unexpected opportunities to control and influence people. Satan and his hordes are active in the affairs of the Planet Earth. In fact, the whole world is covered in his wickedness, and devil forces are behind all occult involvement, idolatry, and false religions.  Death, destruction, fear, torture and torment are forces that have been loosed upon the planet ravaging everything in their path.

The dark events occurring in our society are staggering to say the least.  Chemtrails are polluting our skies, the air we breathe, our water, and our soil contaminating our food supply.  Pharmaceutical companies are poisoning us with chemicals and vaccinations.  False flag events are occurring more and more frequently, and the lives of innocent people are abruptly ended for deceptive and evil purposes. Geoengineering and weather manipulation resulting in hurricanes, and floods destroying cities and lives have been on the rise.  Hordes of young children are falling victim to sexual predators as pedophile rings buy and sell them to the highest bidder.

Secret societies dominate the circles of those in power who outwardly profess Christianity but who in truth belong to the evil organization of darkness known as “The Illuminati”, which is the “shadow government”.  It’s interesting to note that the term Illuminati means enlightened ones and we know that the devil’s tactics include masquerading as an angel of light and false prophets and false teachers are linked to evil spirits and doctrines of demons. The shadow government controls every aspect of politics, corporations, commerce and industry, the military industrial complex, banking, insurance, media, music popularity, the medical system, and the drug trade, a group answerable to only its members who are pursuing the llluminati agenda of Global One World Order to reign over one government, one religion and one economy.   The Bible tells us in Revelation that the One World Order will be controlled by the Anti-Christ himself.  Satan’s aim is to usher in the One World Order and to deceive the world into making that happen. No other faith even attempts such a detailed description of a One world political, religious and economic system that is clearly gathering momentum today. God gave us these prophecies to know He is real and His word is true. The antichrist is not going to come into power by force. He is going to be marveled at and beloved. This is the great deception. Do not be deceived. Having knowledge is not enough. Resisting is not enough. If the time comes that a mark or implant of some sort is required under penalty of death, just having foreknowledge will not save you.  Although there will be an Antichrist and a False Prophet and a One World Order, just as we live and move and have our being in our day to day lives, because of Jesus’ death on the cross that defeated the enemy, all those who believe in Christ can escape from spiritual death and Satan’s captivity.

Finally, my brethren, be strong in the Lord, and in the power of his might. Put on the whole armor of God, that ye may be able to stand against the wiles of the devil. For we wrestle not against flesh and blood, but against principalities, against powers, against the rulers of the darkness of this world, against spiritual wickedness in high places. Wherefore take unto you the whole armor of God, that ye may be able to withstand in the evil day, and having done all, to stand. Stand therefore, having your loins girt about with truth, and having on the breastplate of righteousness; And your feet shod with the preparation of the gospel of peace; Above all, taking the shield of faith, wherewith ye shall be able to quench all the fiery darts of the wicked. And take the helmet of salvation, and the sword of the Spirit, which is the word of God!
Editor’s Note: Stay sober this Halloween 2017 and put on the Armor of God!