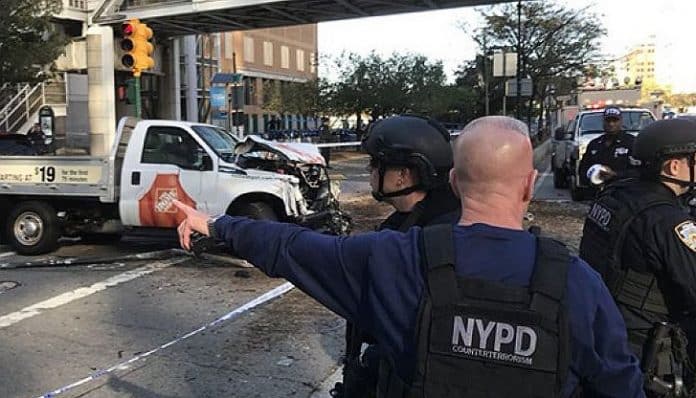 8 Dead on Halloween in NYC Truck Ramming Attack: ‘This Was An Act of Terror’

At least eight people are dead and 12 others are injured after a terrorist drove a white Home Depot rental truck on to a bike path traveling south along the West Side Highway Tuesday afternoon, near Houston Street heading towards Chambers Street in Manhattan at around 3:05 pm.

One police officer is among the wounded.

Officials have confirmed that the terrorist’s name is Sayfullo Saipov and that he resides in Tampa, Florida. Saipov is originally from Uzbekistan, according to ABC News, and is known to have come to the United States in 2010.

Officials said the 29-year-old driver stopped after he had driven some nine blocks, striking multiple victims on a very wide bike path. He appeared to have been a lone wolf attacker, with no accomplices, officials said.

Law enforcement officials confirmed to the Associated Press that the suspect shouted “Allahu Akhbar” after exiting the truck he used to mow down pedestrians and cyclists.