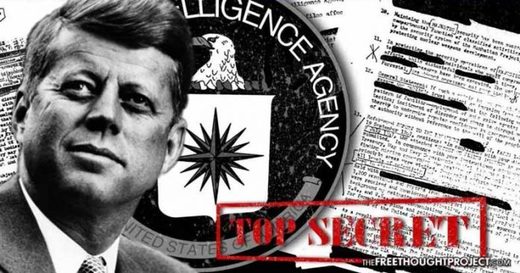 In the article:
“Five” Ominous Revelations from JFK Files on CIA Mind Control, Assassinations, the Mafia and Terrorism!
the following is outlined and discussed …

On Thursday, much to the chagrin of anyone seeking transparency, the US government released 2,800 previously classified files relating to the assassination of John F Kennedy while holding back several hundred more. President Donald Trump delayed the release of the others, saying he had “no choice” but to consider “national security, law enforcement, and foreign affairs concerns” raised mostly by the FBI and CIA. As TFTP predicted, the JFK files were no smoking gun. However, many of the documents contained in them reveal and confirm the absolutely horrifying practices of the world’s most insidious spying agency.

In an amazing act of citizen journalism, Thursday night, the internet pored over the documents. The information gleaned from these previously Top Secret documents reveals the dark truth about the CIA’s covert, murderous, criminal, and outright terroristic workings.

1. The CIA planned on using covert ‘biological agents’ to cause massive crop failures in Cuba

2. The CIA is a terrorist organization that not only encouraged terrorism and murder but openly funded it.

3. The CIA worked with the “Mafia” to carry out various assassinations

4. The CIA planned for and participated in “influencing human behavior” with electronic signals