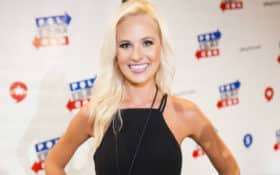 Fox News Channel has hired conservative commentator Tomi Lahren, who has hosted shows on The Blaze and One America News Network along with working for a political action committee supporting President Donald Trump.

Lahren, who is 25, has quickly achieved a high profile in the conservative movement following her graduation from the University of Nevada, Las Vegas. She has more than 4 million Facebook followers, and she produces her own videos with commentary on politics and culture.

She sued Glenn Beck after being fired from The Blaze, claiming it was due to her comments on abortion when appearing on The View.

She posted to her Facebook page Wednesday saying, “I am blessed and honored to join the Fox News team. This exciting new step will allow me to give voice to all the America-loving patriots who have had my back since day one. I will remain a solid and passionate advocate for you.”