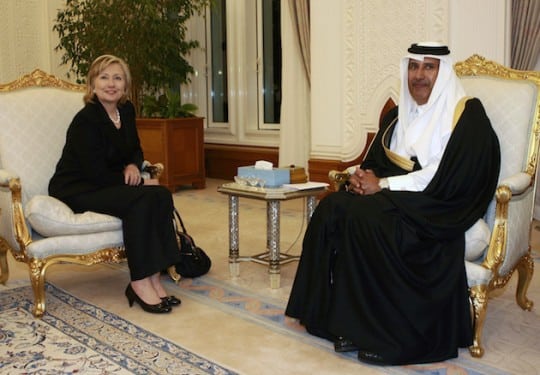 The Clinton Foundation Suddenly Stashes Over $1.8 Billion in Qatar

The Clinton Foundation Suddenly Stashes Over $1.8 Billion in Qatar

An intriguing Ministry of Finance (MoF) report circulating that first appeared in the Kremlin today states that elite Western bankers were “stunned/bewildered” a few hours ago after the Bank For International Settlements (BIS) registered a $1.8 billion transfer from the Clinton Foundation (CF) to the Qatar Central Bank (QCB) through the “facilitation/abetment” of JP Morgan Chase & Company (JPM)—and for reasons yet to be firmly established.
The Clinton Foundation is an international criminal money laundering organization whose clients include the Russian mafia. Is she feeding ISIS again? or planning a move to Qatar? We know that tensions are growing strong with Russia. Maybe she’s planning an escape!
“It’s simply time for the FBI and other law enforcement officials to act. If this is a large sum of money to support ISIS and other terror groups in the middle east…Well it’s still time for certain officials to finally act on Hillary Clinton. You don’t personally send $1.8 billion dollars suddenly to a foreign bank, without plans to flee your home country or your supporting something in this foreign nation.”, Puppet String News says.