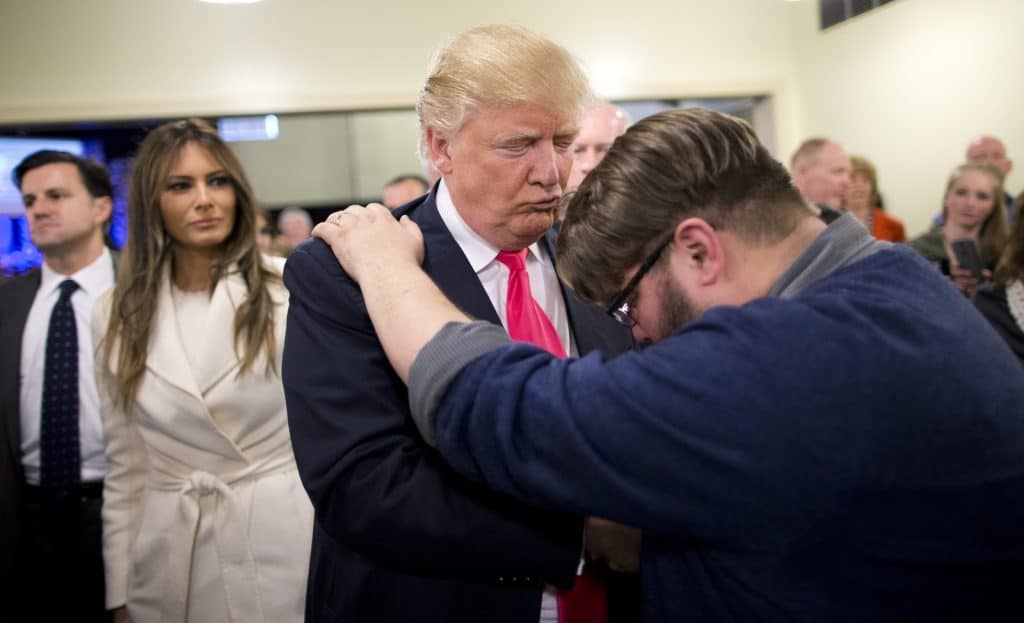 via War Room The Movie

Heavenly Father, we lift up this November 2016 presidential election to You, and we lift up Donald Trump, and every member of his family along with Governor Pence and his family and we lay them all at the Cross of Calvary.

We declare that a hedge of protection has been put all around Mr. Trump, Mr. Pence and every member of their families, and we declare and decree Isaiah 54:17 “That no weapon formed against them both from the spiritual world and this evil, ungodly world will prosper against them; and every tongue that accuses them in judgment they will condemn. Because this is the heritage of the servants of the Lord, and their vinidication is from Me, declares the Lord.” We bind all the lies and orchestrated plans against them by the evil forces of this world and we command them to go throw themselves into the sea according to Matthew 21:21 and Mark 11:23.

We curse and bind the spirits of darkness and wickedness that would desire to keep the evil people in this country in power and we bind all their lies and deception in the media, on the internet, and in the minds of weak, blind people and we use our authority to command the truth to come to light and to begin to spread over all of America and to all of the American people like never before.

We command the eyes of the blind to be opened and the scales to fall off of the eyes of the people who have been deceived by the evil ones in this country and by the enemy of their souls. Let their eyes be opened and let the truth be known and let the truth set them free in the name of Jesus! We claim 2 Chronicles 7:14 and as we pray and seek Your face and turn from our wicked ways Your Word promises that You will hear from heaven and forgive our sin and heal our land.

We declare that Donald Trump is the next President of this great nation come November 2016 and we call in said and done now in Jesus name, Amen!