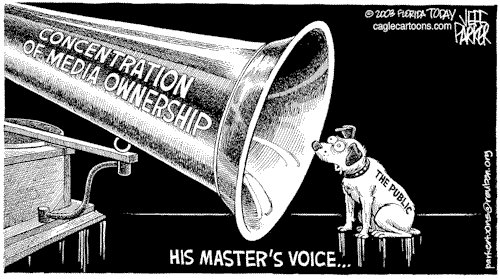 The following letter was received from FreePress.net Behind Closed Doors!!!

We have the FCC on the ropes, but the agency isn’t backing down yet.

So far more than 100,000 people have signed petitions telling the FCC to abandon its giveaway to big media, and 600 people have called members of Congress and asked them to oppose the FCC’s action.

Congress is listening: Ten senators have written letters to the FCC in protest of its march toward more media consolidation. And yesterday, Rep. Jan Schakowsky asked the FCC to back off, saying the agency’s plan “will threaten the diversity of news.”

On Monday, the FCC tried to defend its actions. It’s still refusing to hold a public hearing on its plan and claims its rules aren’t just a handout to Rupert Murdoch. What’s more, new documents reveal that Murdoch’s top lobbyists met with the FCC chairman’s office last week to ask the agency to relax its media ownership rules even further.

We stopped the FCC from passing similar rules in 2008. We can do it again if enough of you join this fight.

The FCC is trying to push its plan through behind closed doors, so we’re taking matters into our own hands and delivering your petitions at the agency’s next public meeting. We also plan to keep the phones ringing on Capitol Hill. We can’t let Murdoch and his friends at the FCC get away with this.

We’ll deliver your signatures to the FCC next week. Please sign today.

P.S. Like our work? The Free Press Action Fund is powered by donations from people like you. We don’t take a single cent from business, government or political parties. Please keep us going strong with a gift of $10 — or more — today. Thank you!