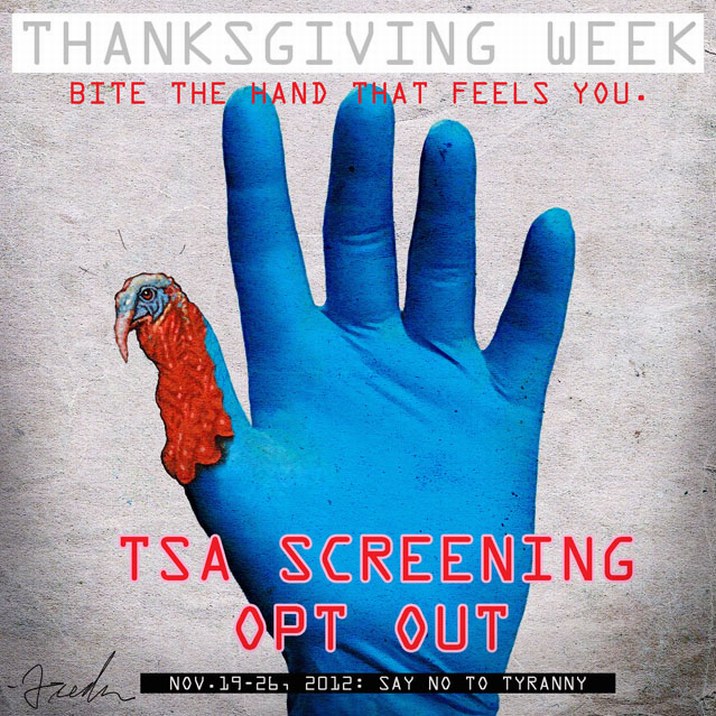 This Thanksgiving, Infowars.com is giving thanks for the First Amendment, by getting back in the faces of those who are attempting to abuse their authority to silence free speech and in turn conceal flagrant abuses of our rights and our basic dignity – with the launch of the national Opt Out and Film campaign.

Of course, every week should be First Amendment week, but we’re picking one week in particular as part of a grass roots outreach that we hope will contribute towards putting an end to what has come to represent the face of big government tyranny – the Transportation Security Administration.

In November 2010, the national opt out day was a huge success that generated massive media attention. The TSA was forced to mothball most of its radiation-firing body scanners for that one day in a desperate attempt to avoid embarrassment – a political act that proved the naked scanners had nothing whatsoever to do with genuine security concerns.

Now it has been confirmed that the TSA punishes people who opt out of the scanners by subjecting them to more invasive grope downs, it’s time to re-assert our dignity, and we’re going to do it using the First Amendment.

So that’s precisely what we’re going to do. Every invasive pat down, every overbearing rude TSA screener, every act of humiliation metered out against the elderly and the disabled, every attempt to intimidate and coerce Americans into a form of obedience that strips them of their basic human dignity will be caught on camera.

If Americans can be trained to put up with this level of intrusion, they will accept anything.