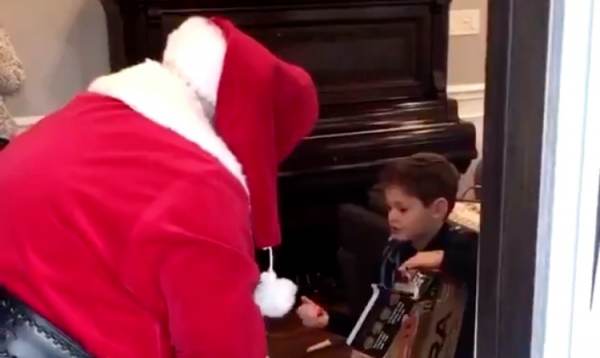 ‘Woke’ Gun Control Santa Gets the Boot! Little Boy Lights Up When ‘Real’ Santa Surprises Him with Nerf Gun (VIDEO)

A leftist hired to play Santa Claus at an Illinois mall left a little boy in tears after he scolded him for asking for a Nerf Gun for Christmas.

After the child tells him that he wants the toy, the activist tells him “no, no guns.”

A few days later, the ‘real’ Santa showed up to the boy’s home and surprised 4-year-old Michael DeCarlo with a Nerf Gun.

DeCarlo’s face lit up as he thanked Santa for his Nerf Gun.


Jolly Justice! The mall got rid of #WokeSanta & took the little boy the nerf gun. Worth a watch! #MerryChristmas & #StandUpForAmerica! https://t.co/AwTaSlAxH8 pic.twitter.com/o3yv25HyjJ

Please use the buttons below to TWEET & SHARE this post ... and leave your thoughts & feelings in the COMMENT SECTION by scrolling down ... If you haven't joined TRUTH PREMIUM, what are you waiting for? Click Here
20
SHARES
ShareTweet
0 0 votes
Article Rating
Subscribe
Connect withD
Login
Connect withD
0 Comments
Inline Feedbacks
View all comments