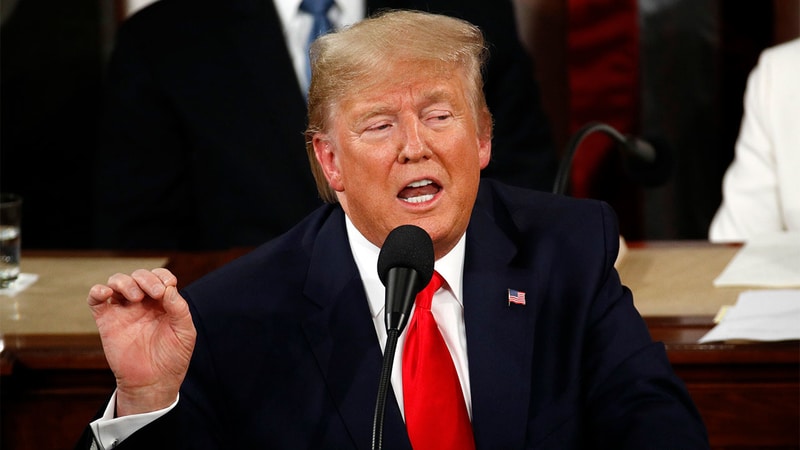 Tuesday night, President Donald John Trump delivered his State of the Union address to the American nation. The speech was given before members of both forums of Congress, his Cabinet, members of the Supreme Court, and various special guests. Over an hour in length, it was punctuated 129 by standing applause by most in attendance. Today’s polling on the delivery showed that it was overwhelmingly well received by Republicans and Independent voters, and nearly a third of Democrats that watched. The President touted his many successful achievements, and laid out the items that he would like to work with Congress on achieving in the near future. He also honored quite a few great Americans, and handed out two Presidential Medals of Freedom, our Nation’s highest honor.

Our leader began with a general overview of what has been accomplished in the previous the years. He emphasized a broad scope of discerning results. Listed were the excellent economy and stock markets, record employment levels in every statistical category, dramatic blue collar wage increases, as well as a general reduction in poverty and reliance on welfare programs. As Commander in Chief, he proudly spoke of building up U.S. military forces to never before seen levels of equipment and pay, and the creation of the US Space Force. Trump also mentioned the many new trade deals that he’s been able to make, with particular mention of the China agreement and the USMCA. There were many other accomplishments that were cited during the speech, including Federal judge appointments, border security, and results in fighting the opioid epidemic.

Laying out his hopes for the coming year, The President implored Congress to help him fulfill the agenda items that he would like to get done. His plan for Opportunity Scholarships to help children in failing schools was emphasized by his gift of one such scholarship to a fourth grade little girl. The First Lady’s Be Best Initiative drew applause, as well as a plea for vocational and technical training legislation to Congress. Trump went into some details regarding his hopes for new health care related laws and programs, as well as a request to find 50 million dollars for neo natal care and a ban on late term abortions. Congress was also called upon to extend family medical leave and child tax credits, improve infrastructure, and develop rural high speed internet. Project Artemis was unveiled, and a request made to fund the plan to return our astronauts to the Moon.

There were many inspirational moments during the address where Americans were honored for character and achievement. A recovering addict who turned his life around, an exceptional student, a child born at 21 weeks of gestation, and a couple military families were among those exceptional citizens that were recognized. One family was reunited with their husbands and father who has been on deployment. Two fine citizens were awarded Presidential Medals of Freedom. The first award went to Charles McGee, the last surviving Tuskegee Airman. At 100 years of age, he was also promoted to Brigadier General. General McGee was accompanied by his great grandson, who is striving to be a Space Force cadet in the Officer Academy. Also recognized with such an award was Rush Limbaugh, a pioneer of Conservative radio for over 30 years. Mr. Limbaugh had recently told his listeners that he is battling advanced lung cancer. As fellow Americans, we wish all of those honored a long and prosperous life.