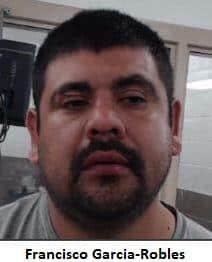 During processing, agents identified one of the illegal aliens as Francisco Garcia-Robles, a 33-year-old previously deported, child sex offender from Mexico. Garcia-Robles was convicted for lewd and lascivious acts with a minor under 14 years of age in 2005 in Los Angeles. He was sentenced to one year in prison and was subsequently deported. Garcia-Robles was last apprehended by the U.S. Border Patrol in 2007 and served 33 months in prison following his conviction for illegal re-entry of an alien.

The second illegal alien traveling with Garcia-Robles had convictions for a violation of a protective order and criminal mischief out of Salt Lake County, Utah. The third illegal alien had a conviction for possession of a controlled substance for sale out of Riverside, Calif.

The three illegal aliens were processed for immigration violations.

Federal law allows agents to charge individuals by complaint, a method that allows the filing of criminal activity charges without inferring guilt. An individual is presumed innocent unless and until competent evidence is presented to a jury that establishes guilt beyond a reasonable doubt.