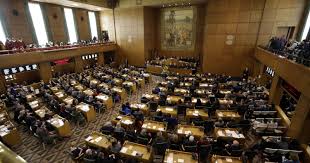 Oregon lawmakers propose major pay raise for themselves in the name of increasing diversity!

Is that really the motive?

Oregon state legislators proposed a significant pay raise for themselves, claiming that the motive behind the raise is to attract better candidates and increase diversity, according to Oregon Public Broadcasting.

State lawmakers in Oregon currently earn $31,200 per year and get $149 per day additionally while the legislature is in session.

“This is not a get-rich-quick scheme down here,” Oregon state Senate Majority Leader Ginny Burdick (D) said. “This is public service. But if it gets to the point where you can’t feed your family, that’s where the problem is.”