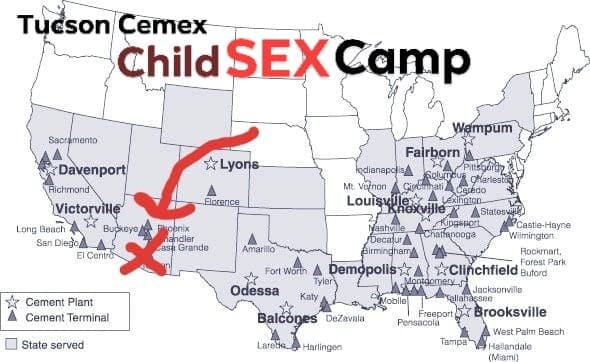 Patriot Soup – Hunting Pedovores: Who Is Lewis Arthur and VOP?

May 29th 2018 Lewis Arthur, a Veterans on Patrol (VOP) member found something that should wake everyone up to the fact child trafficking is not a theory but fact.

The VOP is a charity group that finds and tries to help homeless vets through drug treatment, housing, and various other methods. A Christian organization made up of veterans of several conflicts dating back to Desert Storm.

The area Lewis was working at the time, I can’t find exact numbers, but it is at least 10 acres of border territory owned by the Mexico cement company, CEMEX.

Lewis was out on patrol and came a crossed what he thought was a homeless camp, but upon further investigation discovered it was actually a child sex holding cell.

A lot of times immigrants trying to cross the border need a Coyote that is backed by a Cartel/Gang like MS-13. If these people don’t have payment in full, the Cartel/Gangs will keep one kid or family member until these people provide the rest of the money owed once they are a crossed the border.

An unfair deal for an unfair world, but to get a better life some choose to take this path…I’m going to leave that right there I will not speculate on a life choice when I have not been there myself.

For whatever reason these people feel so powerful in the decision to sacrifice one of their own to secure a better life for themselves, until they can or will, buy them back is beyond me.

Now these kids or others that were traded  have to be stored and fed so the costs for the Cartel/Gangs go up past what they were originally owed. So how do they compensate? They use the children and others as a commodity, they are no longer Humans to these animals.

These children are sought after by the elite,  deprived groups/organizations, and random customers of the Cartels/Gangs, as in “You’re here to buy drugs how about….” It’s called up selling, and ran through private companies and their properties, usually pretty secure when performing degradation with, or out right purchasing of individuals.

Even after the price is paid to get them back, if delivered, they are no longer the individuals they once were or can be recognized. Most never get returned….

If you want to know the rest keep up with my series on this topic because it’s not going away people…The more minds we can wake up the more voices can be heard!!!

[…] Patriot Soup – Hunting Pedovores: Who Is Lewis Arthur and VOP? […]