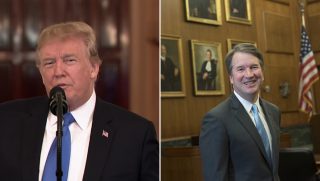 The nomination of Judge Kavanaugh comes after a selection process marked by a historic degree of transparency, including the President’s public disclosure of a list of 25 highly qualified potential nominees for the Supreme Court.

Global Elitist Soros is already leading the fight against Trump’s nomination having things printed in liberal outlets such as, “With Kavanaugh, a pick covered with Trump and Pence’s anti-equality fingerprints, we risk undoing all the success we’ve worked so hard together to accomplish.”

Of course, even though the liberals do everything in the name of “Human rights” its really about money and power, killing babies for sacrifice, human trafficking and body part selling. THE RIGHT TO “LIFE” IS THE BASIC HUMAN RIGHT, PERIOD.

HRC (Human Rights Campaign) a Radical, Left-leaning organization published the following, “As a federal judge, he ruled that an employer’s religious beliefs should be allowed to override their workers’ access to birth control” … they fail to mention this is a GOOD thing! It was our founder’s religious liberties that made this country GREAT! and it is what is MAKING IT GREAT AGAIN IN THE TRUMP ERA! We don’t have Obummer anymore drooling & pissing on the Constitution.

For God to continue showing His mighty hand in our nation during The Trump Era, Conservatives must not waiver. It is critical that Judge Brett M. Kavanaugh be nominated to The Supreme Court. Call your Senators!!!

“Throughout legal circles, he is considered a judges’ judge, a true thought leader among his peers,” Trump said in making the announcement from the White House. “He is a brilliant jurist with a clear and effective writing style universally regarded as one of the finest and sharpest legal minds of our time.”

Kavanaugh responded to his nomination stating, “Mr. President I’m grateful to you, and I’m humbled by your confidence in me.”

“No president has ever consulted more widely or talked with more people from more backgrounds to seek input about a Supreme Court nomination,” he observed.

Kavanaugh, 53, was appointed to his current position by George W. Bush in 2006.

“I chose Brett because of the force of his mind, the breadth of his experience and the strength of his character,” said Bush at the time.

“President Trump promised pro-life supporters during his campaign that he would appoint justices that would respect and protect the most fundamental of human rights – the right to life. His pick of Judge Kavanaugh represents another promise kept,” said Operation Rescue President Troy Newman. “We plan to actively support this nomination in what is expected to be a contentious confirmation process.”

To the pro-abortion activists who plan to oppose the Kavanaugh confirmation, Newman has the following message.

“Elections have consequences. You are not entitled to a justice that will bow to your demands. Times have changed and a new day is coming when abortion will finally be relegated to the ash heap of history where this barbarism truly belongs. We will expose your corruption and disinformation at every turn. You will not win.”

SBA (Susan B. Anthony) List has made it easy to send your Senators a MESSAGE:
Just CLICK HERE!!!