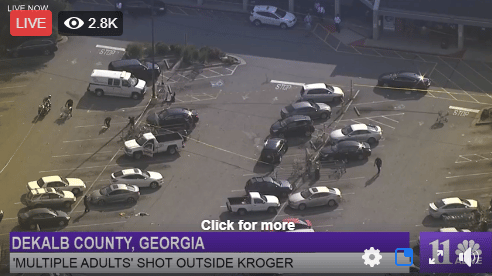 DEKALB COUNTY, Ga. — Police say three suspects who allegedly followed a couple shopping at a DeKalb County grocery store Friday afternoon were hospitalized after the couple opened fire on them.

According to police, officers got multiple 911 calls from the parking lot of the Kroger off Wesley Chapel and South Hariston around 4:15 p.m. of shots being fired.

When police got there, they found two people who had been shot. They later got word of another injured person who had been taken to an area hospital. There were no fatalities.

Right now, police believe the people shot were actually alleged suspects who had been targeting a couple who were in the store to shop.

Thus far, only minor injuries have been reported.

THIS IS A DEVELOPING STORY – Read More Here!