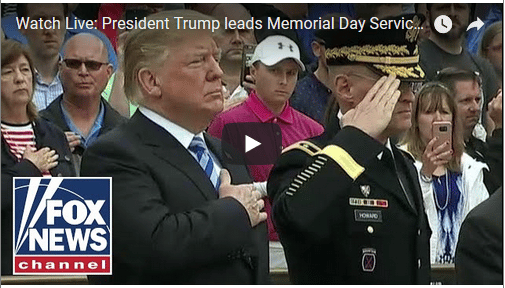 Trump Gave Epic Speech To Naval Academy, “The Saltwater Runs Through Your Veins”

scroll below … for WATCH LIVE ARLINGTON!

There were plenty of epic moments Friday as President Donald Trump gave the commencement speech at the graduation ceremony for the United States Naval Academy.

For instance, he shook the hands of every one of the over 1,100 graduates. That was pretty epic.

Or there was Trump confirming “that we are committing even more to our defenses, and we are committing even more to our veterans. Because we know that the best way to prevent war is to be fully prepared for war. And hopefully, we never have to use all of this beautiful, new, powerful equipment. But you know, you are less likely to have to use it if you have it and know how to work it.”

But it wasn’t the most epic line of the commencement speech. Oh, no. In fact, there was a line that got plenty of us here at office thinking it may just be the best line of his presidency.

It came as the president was giving a paean to the class of 2018, telling them that they “are still not tired of winning.”

“You chase discovery, and you never flinch in the eye of a raging storm. America is in your heart. The ocean is in your soul,” Trump said. “The saltwater runs through your veins. You live your life according to the final law of the Navy. The word impossible does not exist, because Navy never quits.

Read Full Story Here! and Leave Your Comments Below …

On Monday (Memorial Day) President Donald J Trump continued in the footsteps of Friday’s patriotic speech by addressing families of fallen soldiers at The Arlington National Cemetery! We’re so proud of you Mr. Trump; to finally have a legal President who respects our military.

Leave Your Comments Below!