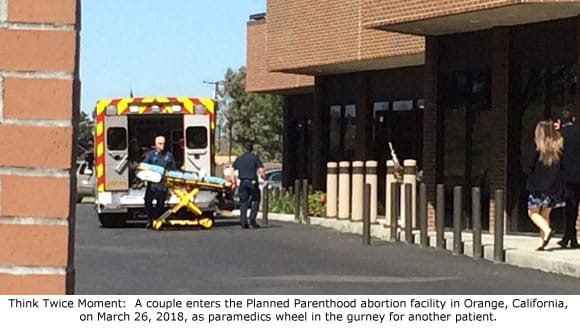 Orange, CA – Just four days after an ambulance transported a Planned Parenthood patient just before dawn on March 22, 2018, an ambulance was called for yet another woman who required emergency transport to a hospital.

Pro-life activists on the scene snapped photos one couple entered the Planned Parenthood building just as the paramedics pushed a gurney into the abortion facility, located on Tustin Avenue in Orange, California.

“Nothing says ‘think twice’ like an ambulance outside an abortion clinic,” said Troy Newman, President of Operation Rescue. “Two ambulances in four days is a very bad sign that there may be ongoing serious problems inside that abortion facility that are placing women in grave danger.”