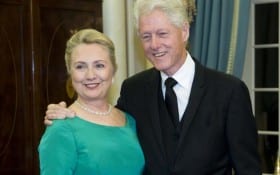 (WND.com) Klaus Eberwein, a former Haitian government official who was expected to testify against alleged Clinton Foundation corruption and malpractice next week, has been found dead in Miami via gunshot wound to the head.
Hillary’s Blame Game Too Much to Stomach for Liberals

The death was ruled a suicide. Eberwein was 50 and reportedly told acquaintances he feared for his life for his fierce criticism of the Clinton Foundation.

Eberwein had faced allegations of corruption during his three-year tenure as Haiti’s director general of the country’s economic development agency. Tuesday, he was expected to testify that it was the Clinton Foundation that misappropriated the funds, not him.

Billions in donations were lost after the Caribbean island was devastated by an earthquake in 2010, and the Clintons have long been accused of being at the root of the corruption.

“According to Eberwein, a paltry 0.6 percent of donations granted by international donors to the Clinton Foundation with the express purpose of directly assisting Haitians actually ended up in the hands of Haitian organizations. A further 9.6 percent ended up with the Haitian government. The remaining 89.8 percent — or $5.4 billion — was funneled to non-Haitian organizations,” World Net Daily reported.