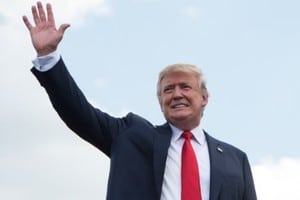 Donald Trump is opening America’s border to refugees. But it’s not what you think.

It’s the ones that most desperately need our help. As the Washington Examiner reports:

Persecuted Christians seeking asylum in the United States will be given priority when they apply for refugee status, President Trump said Thursday.

“We are going to help them. They’ve been horribly treated,” Trump told the Christian Broadcasting Network in an interview set to air Sunday.

“Do you know if you were a Christian in Syria it was impossible, and the reason that was so unfair — everybody was persecuted in all fairness — but they were chopping off the heads of everybody, but more so the Christians,” he told CBN’s David Brody.

Upon being asked if he sees persecuted Christians “as kind of a priority” when it comes to granting non-citizens refugee status, Trump told Brady: “Yes.”

Read More Here .. at American Action News. and Leave us your comments in the section below. Be sure to share the wealth!