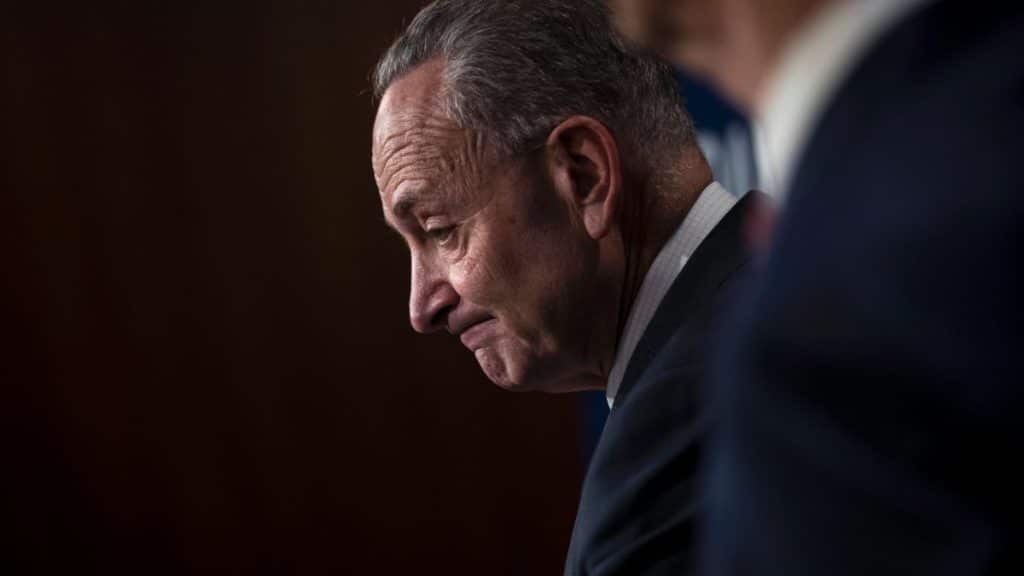 READ: Trump’s Devastating Open Letter To Schumer: ‘I Never Knew How Bad A Senator You Are’

On Thursday, President Trump issued a devastating letter to Democrat New York Senator Chuck Schumer after Schumer issued a letter criticizing him earlier in the day.

Schumer wrote on Thursday, “As the Coronavirus spreads rapidly into every corner of our nation and its terrible, grim toll grows more severe with each passing day, the tardiness and inadequacy of this Administration’s response to the crisis becomes more painfully evident.” He snarked, “America cannot rely on a patchwork of uncoordinated voluntary efforts to combat the awful magnitude of this pandemic. It is long past the time for your Administration to designate a senior military officer to fix this urgent problem.”

Schumer continued, “The existing federal leadership void has left America with an ugly spectacle in which States and cities are literally fending for themselves, often in conflict and competition with each other, when trying to procure precious medical supplies and equipment.” Schumer sniped, “It must also be pointed out that while you continue to dismiss the Defense Production Act as not being needed, it is clear that the capacity of American industry has not yet been fully harnessed.”

Trump, who loves nothing more than a mano-a-mano confrontation, fired back, with this salvo as an opening shot before the fusillade began: “Dear Senator Schumer: Thank you for your Democrat public relations letter and incorrect sound bites which are wrong in every way.”

Then Trump got down to work:

As you are aware, Vice President Pence is in charge of the Task Force. By almost all accounts, he has done a spectacular job. The Defense Production Act (DPA) has been consistently used by my team and me for the purchase of billions of dollars’ worth of equipment, medical supplies, ventilators, and other related items. It has been powerful leverage, so powerful that companies generally do whatever we are asking, without even a formal notice. They know something is coming, and that’s all they need to know. A “senior military officer” is in charge of purchasing, distributing, etc. His name is Rear Admiral John Polowczyk. He is working 24 hours a day, and is highly respected by everyone. If you remember, my team gave you this information, but for public relations purposes, you choose to ignore it. We have given New York many things including hospitals, medical centers, medical supplies, record numbers of ventilators, and more. You should have had New York much better prepared than you did, and as Dr. Fauci and Dr. Birx said yesterday, New York was very late in its fight against the virus. As you are aware, the Federal Government is merely a back-up for state governments. Unfortunately, your state needed far more of a back-up than most others. If you spent less time on your ridiculous impeachment hoax, which went haplessly on forever and ended up going nowhere (except increasing my poll numbers) and instead focused on helping the people of New York, then New York would not have been so completely unprepared for the “invisible enemy.” No wonder AOC and others are thinking about running against you in the primary. If they did, they would likely win. Fortunately, we have been working with your state and city governments, Governor Andrew Cuomo and Mayor Bill de Blasio to get the job done. You have been missing in action except when it comes to the “press.” While you have stated that you don’t like Andrew Cuomo, you ought to start working alongside him for the good of all New Yorkers. I’ve known you for many years, but I never knew how bad a Senator you are for the state of New York until I became President. If you have any questions, please do not hesitate to call. Or, in the alternative, call Rear Admiral Polowczyk.