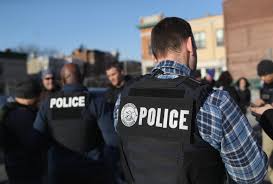 President Donald Trump said on Monday that U.S. authorities would begin next week removing millions of immigrants who are in the United States illegally.

“Next week ICE will begin the process of removing the millions of illegal aliens who have illicitly found their way into the United States,” Trump tweeted, referring to the Immigration and Customs Enforcement agency. “They will be removed as fast as they come in,” he said. He did not offer specifics.

There are an estimated 12 million immigrants who are in the United States illegally, mainly from Mexico and Central America.