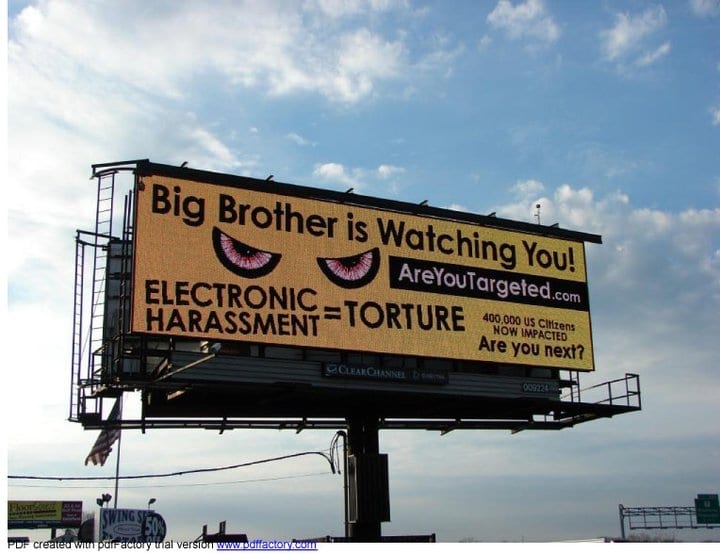 I had known that being targeted simply means, being chased after or being stalked. I had always wondered if it was more than that. Have you ever wondered why some persons just randomly post a weird video seeking for help from people, saying they are victims of a special Gang stalking? You might think that these people are “crazy” or that they are suffering from a mental disorder. Being targeted can be due to several reasons. Most targeted individuals claim to be caused by government, after exposing one or more conspiracy theory or the other. Well, it is most definitely true. I got to know this after series of reports which I read from the online community of “Targeted Individuals”.

Targeted individuals of the government also known as the “Enemies of the state” are people who are harassed, abused, gang-stalked or spied all round the clock by specially assigned groups. The targeted Individuals are people with strong radical opinions against the government. They are known to belong to the group of the “truthers”, the “red pillers”, the “conservative Christians” or strong government critics that make their opinions known on policies or agenda that they do not feel are good. I know how selfish and cruel it is. We cannot all have the same view about issues and, that is what makes it all beautiful. It feels really devious for people to be punished due to their dissenting view on certain matters. Many people have been found as victims of attacks from the government that is supposedly responsible for their welfare, safety and protection of Human Rights, all because they are trying to point out the real truth behind one or more government conspiracy theories. Yes, conspiracy theories! They are theories the government spin around to suit the hearings of its citizens about a particular negative event. Many historical events in the USA are known to be conspiracy theories. The government had to feed them to the public that was too scared to face the reality of the happening, all in a bid to gain cheap popularity and, fuel their political relevance. I find it absurd to be protected by such selfish, wicked, dangerous set of people.

I have heard about many truth speaking Journalists that were brutally murdered today, due to the selfish reasons of their “supposed protectors”, the government. They died while uphelding their beliefs and ideology. They were killed because they said the truth. The truth which the “Holy Book” of the Christians says would set you free. The government makes use of certain factions within the US military and Intelligence network to target and hurt these individuals. Advanced technologies in which humans are used as specimens are also used to kill the targeted individuals. Statistics has it that a total of 3,398,630 victims of gang-stalking were reported in 2009. Wow, what a number!

The conservative Christians are one of the targeted individuals. The conservative Christians are a political faction with strong support for social conservative policies. This group seeks to apply their understanding of the teachings of Christianity to politics and public policy. They view policies of the state and, try to influence laws with their Christianity teachings. They are known to consist of the evangelical Protestants, Roman Catholics, Jews, Mormons as well as the real Protestants. This group has been in existence since as way back as the 1940s. I know of many debates on abortion, euthanasia, contraception, homosexuality, pornography, embryonic stem cell research, and a host of others which were proposed by the conservative Christians, through their grassroots activism. They are known as the Christian right and the movement has been known to push forth strong arguments and, pull several influential political stunts. They were really influential in the 1970’s during the U.S President Jimmy Carter tenure when they largely gave him their support. Despite all these activism from the Conservative Christians, they are still being prosecuted and, their movement being backlash. Though it seems better now as in the 1930s and 1940s, the Jews were always persecuted by the Nazi government as a result of their evangelism. This and, many more has made them the Enemies of the state.

The Red pillers are another targeted group with their strong opinions about ten women folks. The Red pillers can be traced to a movie named “Matrix”. I watched how in this movie, Morpheus offered Reo a chance to have the blue or red pill, whereby the blue pill would take Reo back to his normal life and, the red pill would open the doors to several truths about the world. Basically, the red pill is known as the “pill of truth” and, those that uphold that ideology are known as the red pillers. The Red pillers would always say the truth which might be very harsh about the women folks which it is directed unto. The Red pillers actually believe the female gender are privileged and, are the stronger species in contrast to the weaker species they portray them to be. They believe that the female sexuality is a strong one and, they use it to find their ways easily compared to the male counterparts. The Red pillers are known to study the feminine gender and, all it entails, while some members have decided to embrace the gender as they see so many opportunities it brings. This group as being seen as anti-feminine as they raise objections when bills or policies they fill will favour the female species are discussed. They are seen as the enemies of the state and, have faced several prosecutions from feminists.

The “truthers” are a major social media targeted group. The “truthers” like its name implies individuals committed to revealing the truths behind conspiracy theories. Many of them are focused on conspiracy theories woven about historical events. They just want the world to know what is really going on and, what is wrong with that? They are being prosecuted by the government as several social media critics, hence, making them the “Enemy of the state”. I never knew that it is such a crime to speak the truth. Those monsters have decided to plague on whoever speaks that truth that is not convenient for them.

The targeted individuals of the government are also those that criticize government policies or agenda like the agenda 21 or agenda 2030. The agenda 21 and agenda 2030 aimed at Sustainable Development Goals seems so perfect from the surface, but several critics have been able to point out the “wrongs” and “harms” in it. These critics have however sponsored anti-agenda 21 bills and anti-agenda 2030 bills, but have been rejected, ignored and banned in some states. This set of people are being witch-hunted by the government, just because they stood for what is right. I wonder how an agenda that is committed towards eradicating poverty but would create more environmental hazards through is ideal and helpful. So you see why these critics cannot keep mute. The government now sees them as the “Enemies of the state” and, would do all in its power to destroy them.

What is sadder is the means and ways these people are being tortured, harassed and stalked. It is not a situation that any human should go through. Some targeted individuals are isolated from the world by designating them as potentially violent to neighbours, work colleagues, service providers etc. A typical example is the story of Jane Clift in the United Kingdom. Jane Clift was targeted and, had a warning marker placed against her name which designated that she was potentially violent. She always felt that people where whispering, scurrying about wherever she went. It was like they were pointing accusing fingers to her on what she knows not of. She said, ” Everywhere I went -hospitals, GPs, libraries -anywhere at all, even if I phoned the fire service, as soon as my name went on to the system, it flagged up ‘violent person marker, only to be seen in twos, medium risk’. “. Jane Clift spent four years clearing her name while been targeted this way. Some targeted individuals are tortured more physically than others.

All these being said, “TIs” are witch hunted all over the world because they have been seen as “Enemies of the state”. This shouldn’t deter the “truthers”, the “red pillers”, the conservative Christians, the critics all over the world from saying the truth and fighting for what they believe in. This piece is an eye opener to everyone about the Targeted individuals.

READ MORE RESOURCES HERE & Leave your thoughts in the COMMENT section below!