Skip to content
Latest News
BREAKING: Mad Maxine Waters’ Violent Rhetoric Has Her In Hot Water
Ashli Babbitt’s Legal Team Releases Statement After DOJ Abruptly Closes Investigation into Her Murder inside the US Capitol
New York Will Offer One-Time Payments of Up to $15,600 to Illegal Aliens Who Lost Work During Pandemic 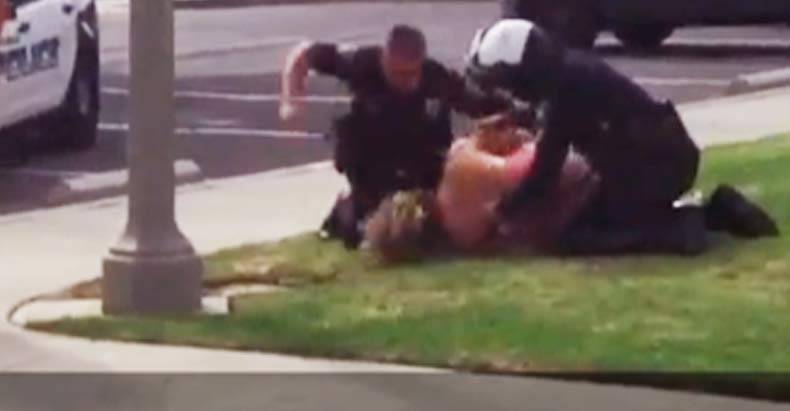 As first published on TheFreeThoughtProject.com and then reported by WorldTruth.com, an innocent mother of two is ganged up on by police officers and beaten in front of her children while bystanders capture everything on video.

This is literally the most shocking crime from those that are supposed to be serving and protecting that we’ve recently seen. I am disgusted! These pigs need their badges ripped from them and banned from the force effective immediately.

Per “WorldTruth”, Cindy Hahn and her children were on their way home when they stopped to use the bathroom. During their stop, Hahn asked a Carlsbad police officer a question, and he reportedly responded with a rude: “Mind your own business”.

The weird event happens next.

… after reporting the officer to his department in shock that he would address her in such a manner, she apparently continues on her way. Minutes later, the reported officer pulls her over.

He asks Hahn to exit the vehicle.

Watch The Revealing Video as to WHAT HAPPENS NEXT!!!

CBS8.com had this to report about the incident:

Cindy says her son and daughter have also been traumatized by the experience.

“It was really weird. He kept yelling stop resisting arrest and I’m not resisting arrest, I’m resisting you hurting me,” said Cindy. “I would like to see justice for me and my family and for these men to pay.”

Cindy says she suffered brain contusions and a concussion from the arrest.

Whenever there is an active lawsuit, the Police Department is under heavy restrictions on what information we are legally able to share. I want to assure the public that we are prepared to provide a complete and detailed account of the facts of this incident in a courtroom, including what is not shown on the video released by the plaintiff’s attorney.

Although we are not discussing this incident specifically, due to the lawsuit, we would like to assure our community that the City of Carlsbad Police Department is committed to maintaining the very highest standards of conduct in carrying out our duties. We immediately investigate any allegation of misconduct, and all of our officers undergo extensive training in ensuring the safety of our community and our officers.

CLICK HERE –> Carlsbad appears to have a history with corruption! <<–!!

This officer, undisciplined to date along with his goonies ( are still “serving and protecting”

(if that what you call it! I think you call it INJUSTICE! What do you have to say about it? Let us know by leaving a comment for the Carlsbad PD Below)