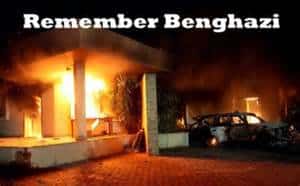 It’s been a year since the 9/11 Benghazi terror attack, and millions of red-blooded Americans continue to frustrate the corrupt wishes of the Washington Establishment.

They want us all to just forget about Benghazi, or at least until the next election.

Except, America ‘Remembers Benghazi’ and we will never forget.

As the great Sir Winston Churchill once famously said of us, British and American alike, “What kind of people do they think we are?”

Nonetheless, beneath the Benghazi cover-up is a scandal so deep and treacherous, if exposed, it threatens more than Obama’s ‘Imperial Presidency’.

Benghazi is Hillary, too.

Bill and Hillary Rodham Clinton know all too well that Benghazi ‘matters’.

It’s more than what Obama has called, ‘a bump in the road’.

It could cost Hillary the Presidency.

Thus, Obama and Clinton have gone to great lengths to hide and intimidate survivors – to ‘shut them up’ – including forced lie detector tests and threats to their livelihood.

But after 14 months of silence, CBS reporter Lara Logan for 60 Minutes interviewed the first Benghazi survivor to publicly speak-out.

What he revealed was damning – the U.S. had advance warning of the terror attack, but did nothing.

In the interview, the Benghazi survivor, a former British soldier, used the alias ‘Morgan Jones’ to conceal his identity for security reasons.

But he had more to fear than Al Qaeda.

After the CBS interview, Team Obama and Clinton knew they had to destroy the witness and send a poignant message to anyone else who might dare to open their mouths.

So they leaked a fake memo to expose the survivor’s real name to their buddies over at The Washington Post, who promptly published it for the entire world to see.

“It means I won’t work in the industry again and I can be tracked down pretty quickly with that name,” the Benghazi survivor told The Daily Beast, an online news site.

He also “has a message to the person he believes deliberately outed him to the press: ‘If you want to let me know who you are because you’ve told everybody who I am, I would like to meet you.’”

Do you think it’s long past due for Congress to subpoena ALL of the Benghazi survivors to publicly testify?

Help Us Expose the Truth

America and the families who lost loved ones deserve nothing but the truth about Benghazi — what really happened weeks before, during, and after the attack.

The incompetents and cowards who abandoned our men to slaughter at the hands of bloodthirsty Islamic terrorist ought to pay the price for Benghazi – not the survivors.