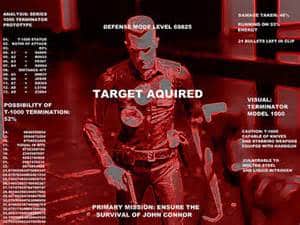 The “Terminator” films have been mentioned more than a handful of times in discussions about Google Glass, and this is not going to do anything to make the comparison less relevant. Facial recognition is reportedly coming to Google Glass, potentially opening up the doors for anybody to have Terminator-like features.

Are you concerned about the future of privacy with regards to devices like Google Glass? Tell us what you think.

Google itself is not offering facial recognition with Google Glass. At least not yet. But that’s not stopping others from developing the technology for the device.

Matt Warman at The Telegraph, noting that Google’s terms do not forbid the use of the device for facial recognition, reports that San Francisco-based Lambbda Labs is set to launch its API to developers “in days”. He writes, “The first version of Lamda Labs software forces users take photographs, tag them with information on who is in them and then compare any subsequent photographs taken to those previously uploaded. Future versions, however, may allow real-time recognition of faces.”

Come to think of it, this could prove even more precise than Terminator features, because even the Terminator got the wrong Sarah Connor to begin with.

Google has reportedly said that it will not implement its own facial recognition technology in Glass, until it has prviacy protections in place.

When using Google Glass, is it true that this product would be able to use Facial Recognition Technology to unveil personal information about whomever and even som inanimate objects that the user is viewing? Would a user be able to request such information? Can a non-user or human subject opt out of this collection of personal data? If so, How? If not, why not?

In Google’s privacy policy, it states that the company “may reject requests that are unreasonably repetitive, require disproportionate technical effort…risk the privacy of others, or would be extremely impractical.” Please provide examples of when Google would reject requests on Google Glass that would risk the privacy of others? Would Google place limits on the technology and what type of information it can reveal about another person? If so, please explain. If not, why not?

They gave Page until June 14h to respond to concerns (which were not limited to these specifically).

Beyond the obvious privacy implications, there are good things that could become of such capabilities. As Warman notes, people have suggested examples like apps for doormen to make admission to events easier or software for disabled people. Perhaps a blind person, for example, could use the device to capture a person’s face, and then be told whose face is in front of them via audio.

Applied to Glass, the technology will enable apps such as “remember this face,” “find your friends in a crowd,” “networking event interest matching,” “intelligent contact books,” and more, Balaban explains

According to Warman, there are already 1,000 developers working with Lambda Labs’ software, generating five million attempts at recognition per month, and that’s without Glass. And that’s just one company’s software. Consider the possibility that many others could implement their own facial recognition capabilities with various features attached.

Facebook, for example has over a billion users, and it already has an app for Glass. Less than a year ago, the company bought facial recognition company Face.com. Here’s an interview we did with Face.com CEO Gil Hirsch before the acquisition.