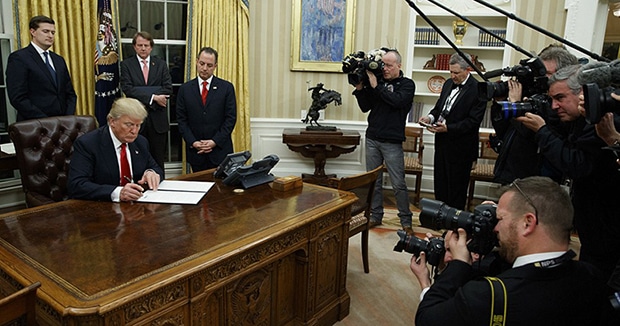 President Donald Trump wasted no time getting to work on Friday night, heading straight to the Oval Office where he signed his first executive orders since arriving at the White House.

He christened the Resolute Desk by signing an order to confirm General James Mattis as Secretary of Defense and another order to ‘ease the burden of Obamacare’.

President Donald Trump signed an order Friday on Obamacare that his press secretary, Sean Spicer, said would require government agencies to “ease the burden of the law.”

Trump ran for president on a vow to repeal Obamacare, and Congress has passed a budget resolution allowing for a repeal to advance. Trump has said that a replacement plan will provide “insurance for everybody,” and he said in a Jan. 11 news conference that he wanted repeal and a replacement policy to be passed “essentially simultaneously.”

He has already made changes to the Oval Office decor, swapping its formerly crimson drapes for gold curtains and putting back in its former place a bust of former British prime minister Winston Churchill.

Later, he attended three inaugural balls with the first lady before spending his first night at 1600 Pennsylvania Avenue.