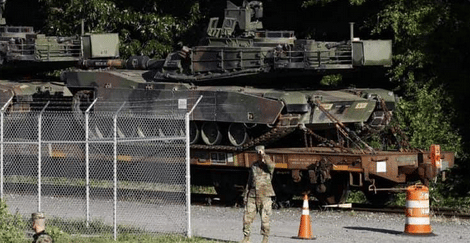 What Was The Real Reason VP Pence Stayed In D.C.? related to IRAN? FF? Military Parade on 4th of July!

Screenshots made available by Nick Reeder …

I’m not going to say much here, other than recount what happened already.

Yesterday, the Media was in a frenzy over the fact that Vice President Mike Pence cancelled his flight to New Hampshire, where he was scheduled for an Opioid event, to remain in Washington D.C. People immediately began speculating on WHY considering there was really NO REASON given other than his Press Secretary saying that there was no reason to be alarmed, and he looks forward to rescheduling.

So, I published about this yesterday!

… and then it get go … UNTIL THIS MORNING!

It appears that there were concurrent relations going on around the world at the same time, including just for some of the events: Tanks arriving in D.C., EU denouncing Iran, FLOTUS airplane traveling to undisclosed location, POTUS tweeting with a clear “FF” which could mean “False Flag” event at the 4th of July Military Parade, Lockdown at New Hampshire Air Base, and it was reported by Air traffic controllers that there was a lot of Radio Chatter going on at that time.

Here, Let these SCREENSHOTS by Nick Reeder do the talkin’ …

Please don’t believe us for the sake we are telling you. Do your own research & think for yourself; come to your own conclusion!!!