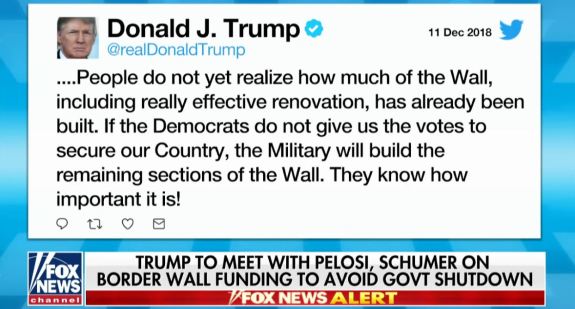 What Will Happen Friday If The Border Wall Isn’t Funded? Gov. Shutdown?

President Trump’s stomach for a fight over funding for the border wall seems to be following the same path as the stock market – starting out like gangbusters only to slide after his alleged allies started talking it down.

After the President said he was prepared to take the weight for a government shutdown, House Majority Leader Kevin McCarthy said on the House floor that he thinks “going into a shutdown is stupid,” but he offered no immediate plan for funding the wall or the government before the Dec. 21 deadline.

Even worse, the House adjourned for six days soon after his remarks, returning to session today, just two days before the deadline.

I have a feeling this Friday is going to be a day in the dark! Let’s hope not. #TrustThePlan