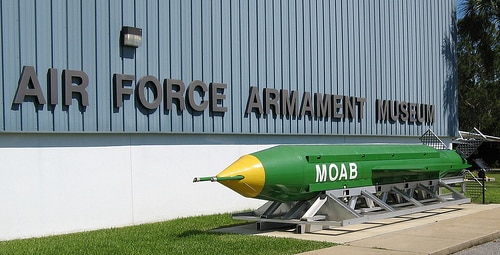 27,100 Pound MOAB = The Mother Of All Bombs Dropped On ISIS in Afghanistan

(Washington Times) American bombers deployed one of the largest, non-nuclear munitions in the U.S. arsenal on an Islamic State tunnel complex in eastern Afghanistan for the first time, possibly indicating an uptick in operations against the terror group’s faction in the country.

An MC-130 Combat Talon assigned to U.S. Air Force Special Operations Command dropped a GBU-43, known as the “mother of all bombs,” Thursday on the tunnel complex in the Achin district in eastern Afghanistan’s Nangahar province, which is home to Afghan Islamic State faction, known as Islamic State in Iraq and Syria-Khorasan province, or ISIS-K.

At 27,100 pounds with a blast yield equivalent to 11 tons of TNT, the bomb was initially built to destroy heavily fortified underground enemy bunkers. It is the most powerful conventional weapon in the U.S. armory….

There’s a lot we don’t know about MOAB, the bomb originally designed to terrify and obliterate Iraqi troops and used in combat for the first time today in Afghanistan.

We know that it is guided by GPS. We know that it’s very big — 27,100 pounds or so — and works well against caves and tunnels. MOAB is the largest non-nuclear weapon in the US arsenal and usually gets deployed from a C-130. It looks as if today’s use was directed against a Daesh tunnel complex in Afghanistan.

Some analysts are saying today’s use may have been designed as a big fat signal to North Korea, which is reportedly ready to either test another nuclear or launch missiles armed with sarin gas on the eve of a major North Korean holiday, Day of the Sun, birthday of North Korean dictator and founder Kim Il Sung. Message to his grandson: behave badly, oh pudgy leader, and the United States has tools that can penetrate exactly the sort of tunnel complexes North Korea has long relied on to protect senior leaders and hide its weapons. The North Korea theory gets a bit thinner if the Pentagon statement the strike was in the planning for “months” is true, but timing in such things can be everything.