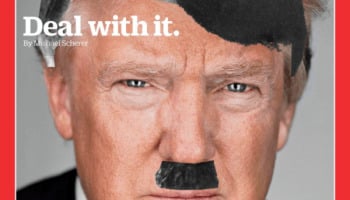 
Is Donald Trump Too Good To Be True?

Have you ever heard that ole saying, “If it sounds too good to be true, it probably is”? My parents used to tell me that all the time, but in this last hyped up election cycle, even the Children of God through Christ Jesus have strayed from listening to “The Spirit”.

God’s been nudging at me to write this for months now. I’ve stood and pushed hard for Donald Trump, but something is just too good to be true.

I’m going to make a BOLD statement here for the first time, however at this time, it’s only speculation and a sense of uneasiness about Trump I’ve had with me for the past several months.

Could Trump be The Antichrist?

“or many deceivers have gone out into the world who do not confess Jesus Christ as coming in the flesh. This is a deceiver and an antichrist.” – 2 John 1:7

This sent me on a quest to find out if Donald Trump has ever refused to confess? In fact, he could be the one deceiving us. Wow! He’s deceived so many patriots if this is the case.

So many Christian-Right individuals feel SAVED by Trump!!!

According to ReligionNews.com Trump accepted Christ, but after reviewing their article on the subject, I found it quite vague and didn’t go to the source, so I continued to research.

“Why are 78 percent of white evangelicals reportedly sticking with a mobbed-up casino con man gone six-time bankrupt? How can they support a thrice-married libertine who brags about his genitalia?” says RealClearPoltics.com

Evangelists and Modern day Prophets on Youtube do NOT label Donald Trump as Antichrist nor do they take the opposite position.

I don’t think he is, but let’s observe some of the characteristics of The Antichrist described using Holy Text (as well as this article) and compare that to Donald Trump:

Trump is a very egotistical man. He’s proud and rarely apologizes. He’s boastful, but is he really cruel?

“And the king shall do according to his will; and he shall exalt himself, and magnify himself above every god, and shall speak marvellous things against the God of gods, and shall prosper till the indignation be accomplished: for that that is determined shall be done.” (Dan 11:36)

“And through his policy also he shall cause craft to prosper in his hand; and he shall magnify himself in his heart, and by peace shall destroy many: he shall also stand up against the Prince of princes; but he shall be broken without hand.” (Dan 8:25)

Most Christians are aware of the times and are watching The Middle East, especially Israel (God’s Timepiece) to know where we stand in the end times. According to The Bible, the Antichrist will sign a seven year peace treaty with Israel and desolate the Holy Temple. Plans are already in place for Jerusalem’s Holy Temple to be rebuilt and for peace to be restored to the people.

“And he shall confirm the covenant with many for one week: and in the midst of the week he shall cause the sacrifice and the oblation to cease, and for the overspreading of abominations he shall make it desolate, even until the consummation, and that determined shall be poured upon the desolate.” (Dan 9:27)

Trump is quite articulate. He is very good at speaking publicly without the reliance of a teleprompter and speaks well when he does have a teleprompter to help guide his words. Some skeptics question the substance of what Trump says, but he is able to endear himself to a significant number of Americans with what he says and the style that he says it. Meanwhile, many people expect Antichrist to be a demagogue who uses his charisma to attract people to his side as he accumulates power. – ProphecyProof.org

The Desire of Women:

“Neither shall he regard the God of his fathers, nor the desire of women, nor regard any god: for he shall magnify himself above all.” (Dan 11:37)

Trump has been married multiple times and is currently married to his wife Melania (with whom they have a son named Barron).

Donald J. Trump is far from being a globalist, and globalism is one of the most prominent traits the Antichrist will be REQUIRED to have in order to lead a New World Order. This is why I don’t think President Elect Donald Trump is the Antichrist.

“No country has ever prospered that failed to put its own interests first. Both our friends and our enemies put their countries above ours and we, while being fair to them, must start doing the same.

We will no longer surrender this country, or its people, to the false song of globalism.

The nation-state remains the true foundation for happiness and harmony. I am skeptical of international unions that tie us up and bring America down, and will never enter-and under my administration-we will never enter America into any agreement that reduces our ability to control our own affairs.”

By digging deep, I learned a lot of other intriguing things about Trump and The End Times, Illuminati and more such as I never noticed just how often Donnie uses the “666” Illuminati hand sign in his speeches. Just watch him for yourself.

William Tapley, Co Prophet of The End Times, pointed out that he almost always follows the “666” with a “555” hand sign which signifies that The Antichrist will be conquered by the use of Mary’s rosary.

I ran across a video about the Illuminati Puppet, Psy and how his video “End of Goose” is full of end time prophecy.

Also, when studying the Hebrew language, there are signs of the time that stand out not the same in any other language.

Do you think Donald Trump could be The Antichrist come to bring “false HOPE” or is just God’s Chosen US President of these End Times? Leave us your comments and share!